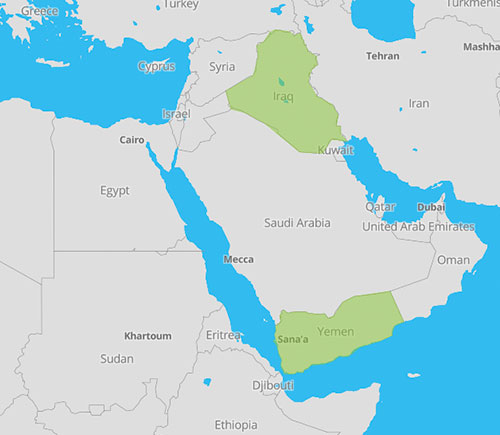 To improve the skills of the media in relation to concepts and issues associated with gender equality and women’s rights in Iraq and Yemen.
627 K
24months
220Trained professionnals

Yemen and Iraq are currently facing severe security instability, which has significantly affected the circumstances of the population, and of women in particular, who are increasingly marginalised and exposed to new threats. Moreover, journalism as practised in both countries remains a male-dominated environment. This is reflected not only in the absence of women in decision-making positions, but also in how information is covered by the media.

The Makanati project (which means "my place" in Arabic) promotes greater participation of women in Iraqi and Yemeni society and a better understanding of their concerns by the population, particularly through the production and dissemination of content about them. It also seeks to raise awareness among journalists and future journalists regarding gender equality and women's rights.

Finally, it contributes to improving the professional skills of female journalists in order to promote their access to decision-making positions.

Awareness of the importance of women’s rights and gender equality

Wedad Albadwi, founder of the Cultural Media Centre in Sana’a

April 13, 2021
Education and culture lie at the very heart of a developed society. Journalist Wedad Albadwi has grasped this, which is why she set up CMC, the...

Support for the production of media content covering the challenges faced by women, women’s rights issues and gender equality

Launch of the makanati.net platform in Iraq

February 17, 2021
As part of the Makanati project, a website for Iraqi women will be launched on 15 February 2021. This platform by and for women was created and...

Launch of the hodaj.net platform in Yemen

February 18, 2021
As part of the Makanati project, the Hodaj.net platform dedicated to Yemeni women will be launched on 17 February 2021.

Changing the way women are perceived in Iraq and Yemen

March 11, 2021
Launched in 2020, the Makanati project (which means “my place” in Arabic) promotes greater participation of women in Iraqi and Yemeni society and...

#Makanatimedia
Delivery of production equipment to two beneficiaries of technical training, before their return to Baghdad to continue the distance training. Erbil, February 5, 2021.

#Makanatimedia
The beneficiaries of the training on podcast production techniques, before returning to their regions, following 5 days of intense face-to-face training. Erbil, February 5, 2020.

#Makanatimedia
Open discussion between the participants (journalists and CSOs), to establish the recommendations at the end of the national seminar on the issues of gender equality in Yemen, organized by the SEMC - 8/2/2021, Aden.

#Makanatimedia
Intervention by a journalist at the national seminar on gender equality issues in Yemen, organized by the SEMC - 8/2/2021, Aden.
PrevNext

AHJ_org
🔵 #Makanatimedia As part of the Makanati project, a website for Iraqi women was launched. This platform by and for women was created and developed by Iraqi women studying journalism. 👉 https://t.co/NXFc6B8t3Ghttps://t.co/wDU0ilS1Kg
Thu, 02/18/2021 - 14:57

MakanatiMedia
RT @MakanatiMedia: Join us here and write your opinion about #Genderequality by tweets or on our live at facebook https://t.co/LHrWm3R0SU…
Tue, 03/09/2021 - 16:49