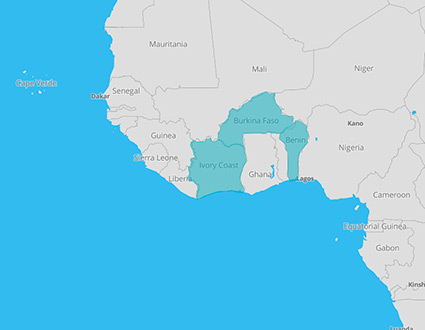 Rumours and information tampering are nothing new, but the Internet has accelerated the rate at which this misinformation has been spread in recent years, reaching more people as a result. The fact that content producers and distributors are no longer necessarily trained journalists bound by a code of ethics is a factor leading to the rise of "fake news".

While access to diverse forms of reliable and independent information is synonymous with sustained rule of law, mass dissemination of fake news can be a destabilising factor in democracies. Therefore, it is critical that the media and players within civil society avoid the pitfalls created by misinformation by promoting dialogue with stakeholders (political authorities, bloggers, the general population).

The Verifying Fake News in Africa project is a response to the need for African media to be better equipped to combat the spread of fake news in the three countries of Benin, Burkina Faso and Côte d'Ivoire, particularly when elections are being held. The project is being conducted in partnership with The France 24 Observers.

Verbatim
“It is good that the journalists' community and the media are thinking about how they will deal with the election campaign through the verification of information. I believe this will contribute to a more peaceful climate of public debate.”
Philipe Di Nacera, journalist at 7info (Côte d’Ivoire)

Three collaborative forums reflecting on the topic of fake news, for launching the project in each country.

December 23, 2019
From 19 to 21 November 2019, around 50 stakeholders from the media and information sectors came together in Ouagadougou to discuss the challenges...

Discussing fake news at the Night of Ideas in Ouagadougou

February 8, 2021
The 6th edition of the Night of Ideas, which was held on the evening of 28 January 2021 in Ouagadougou (Burkina Faso) addressed new forms of...

May 15, 2020
In a global environment where digital technology is becoming increasingly more important, mass dissemination of fake news can be a destabilising...

July 6, 2020
Over the course of one month, they have learned fact checking techniques for search engines and major social media platforms (Facebook, Twitter...

A new app for fact-checking training

April 8, 2021
CFI is launching “Let’s combat misleading information”, an app designed in partnership with France 24 Observers, which is based on the LAFAAAC*... #VerifoxAfrique
Forum of dialogue on the stakes of the Infox during the electoral period in Ivory Coast, November 2019.
PrevNext
Media & governance