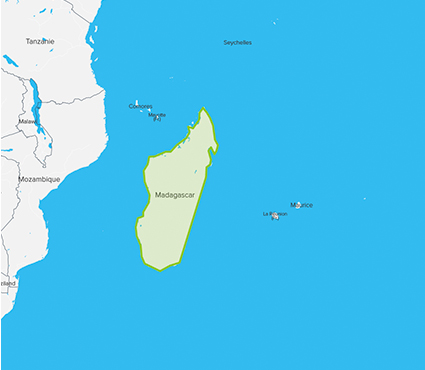 To build on the skills of the Madagascan journalists who took part in the Media 21 project, and strengthen any weak areas identified in the initial part of that project
To help Madagascan media organisations to incorporate climate change across wider issues linked to the SDGs
To help listeners in the areas covered by the radio stations to keep up to date with and gain a better understanding of the issues and consequences of climate change in their day-to-day lives, so that they can identify good prevention and adaptation strat
460 K
12months
10Participating stations

Launched in 2015 to coincide with the Paris Climate Conference, the Media 21 project worked extensively with media organisations in Eastern Africa and South-East Asia to help them further incorporate climatic, ecological and environmental issues into their editorial policies.
The work produced made it possible, in particular, to raise local populations' awareness of matters relating to global warming.

The Terra Media project, which this time is focusing solely on Madagascan radio stations, follows on from this initiative. It aims to build on the knowledge that was developed during the Media 21 project, while at the same time perfecting the technical skills of the journalists taking part, especially as regards digital audio editing, reporting techniques and the production of magazine shows.
All the issues covered will tie in with the four major Sustainable Development Goals (SDGs), namely combating climate change, managing marine resources, improving health and well-being, and increasing food security.

Six days of meetings with researchers, NGOs and groups to bring journalists up to speed on climate change and the SDGs most impacted by it.

November 9, 2016
The first training workshop for the Terra Media project took place at the Institut français in Antananarivo between 24 and 29 October 2016...

Six days of training for honing digital audio radio editing techniques: to gain the fundamental knowledge of a digital audio editing station (editing, insertion of effects, automation, etc.) on dedicated software. Sound recording during reporting will also be on the agenda.

Terra Media: Reporting from the Deep South of Madagascar

February 16, 2017
A training course for producing radio magazine shows on climate change was held from 23 January to 4 February, and gave the ten selected...

Each radio station will receive a €1,500 grant which they can use to bring their production equipment up to standard, depending on their identified priorities (computers, mobile recording devices, telephone interfaces, etc.).

Two 12-day sessions will be organised to enable journalists working for local radio station to enhance their interviewing and reporting techniques and improve the ways in which they produce magazine shows aimed at informing the wider population about the topics covered by the project. The sessions will be organised by province, and will focus on the most important issues facing the local area.

Training support and editorial supervision will also be provided remotely by a local coordinator and the French expert who previously led the skill-building sessions.

A competition rewarding the best broadcasts

The project will end with a competition to identify the three best radio productions. The winning journalists will receive a range of prizes both for themselves and their radio stations, such as laptops and digital recording equipment.

Three sessions will be held to enable the directors of the radio stations to perfect their team leadership, management and marketing techniques and engage as much as possible with the local community.

That’s a wrap for Terra Media

February 9, 2018
The training scheme for journalists from Madagascan radio stations ended in mid-December 2017 with a competition for awarding the best awareness...