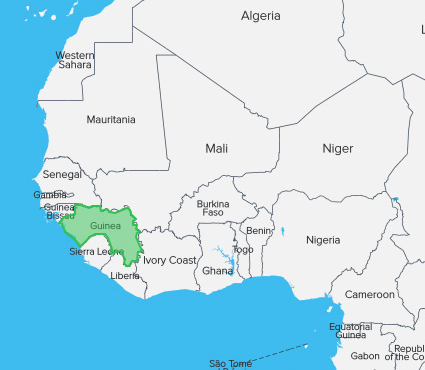 To strengthen the ability of various media outlets to produce radio broadcasts, television reports and multimedia articles and reports for online media on health-related matters in Guinea.
To enable journalists to get a better understanding of the issues and responsibilities associated with health-related news, to teach others about those issues in a practical way, to find and verify information, and to process that information and spread
380K
12months
60Trained professionnals

The media landscape in Guinea consists of a wide variety of privately owned, commercial, community and rural radio stations, together with several privately owned television stations and numerous online news sites and press publications. However, the health news provided by all those media outlets is often not very attractive, and instead rather bland. Guinean journalists regularly encounter difficulties in accessing information, and lack the training needed to cover health-related topics and then spread them to the people. In addition, a large section of the population does not even have access to this type of content, since they live far away from the major urban centres and from the large media outlets that most often broadcast it.

Now, in a country like Guinea, which was recently hit by the Ebola epidemic, spreading information about health is absolutely crucial. In addition, this information must be accessible to the entire population, regardless of whether they live in urban or rural areas, and whether or not they can read and write. It must be practical and understandable to everyone, and address all the health-related concerns of the target populations.

Launched in 2016, the 'Guinea Health News' project offers practical training for strengthening journalists' know-how and specific knowledge in this area. It is primarily intended for local radio stations, which, as they are spread across the entire country, are able to reach people from all backgrounds, but is also offered to television stations and the online press. In order to ensure the long-term future of such an approach, the project also aims to train six Guinean journalists in devising and leading health journalism training sessions.

Verbatim
All the journalists we have just formed seem to support the idea of having access to a digital platform for the exchange of information.
Sylvie Sargueil, health journalist and trainer of the project

Six journalists from privately owned or community radio stations in Guinea are selected following a call for applications. They benefit from a training session designed specifically for trainers, in order to strengthen their abilities to devise and then lead a session for honing participants' skills in producing radio broadcasts on health-related issues.

To mark the launch of the project, a dialogue workshop is being organised, giving media proprietors, journalists and health professionals the opportunity to jointly take stock of how health-related matters are currently dealt with by the Guinean media, and think about how they can work together more effectively in order to provide the Guinean population with more detailed and reliable health information.

Two training sessions are led by a French expert having a great deal of experience in coordinating and producing health magazine shows, and are provided to journalists from 10 privately owned radio stations in Conakry and from 10 other privately owned and rural radio stations. In order to improve their capabilities, two of the journalists having taken part in the training for trainers work alongside the expert for two weeks. This initiative is organised in partnership with the Maison de la Presse de Guinée (Guinea Press House).

In order to cover as much of the country as possible, 20 journalists from 20 newly created provincial radio stations are also trained by two of the four Guinean trainers.

An information guide for health journalists

July 5, 2016
As part of the Guinea Health News project, CFI and its partner Fraternité Médicale Guinée (Guinea Medical Fraternity, FMG) are publishing a...

Three privately owned television stations are selected to take part in this workshop, which involves training five two-person teams (each made up of one journalist and one cameraman) in producing short reports (2-4 minutes) on matters relating to health, which will then be included in their various newscasts or magazine shows.

The participants are supervised by a journalist specialising in health, and by a VJR for the technical aspects (image, sound, editing).

Ten online press journalists are selected, with the support of the Maison de la Presse and AGUIPEL (the Guinean Online Press Association), in order to be trained in how to cover health matters on this form of media. The online press sector in Guinea is still at the fledgling stage, but it is developing strongly. There are now around 50 Guinean news websites and blogs on the Internet, but providing coverage of health-related issues does not appear to be one of their priorities.

February 13, 2017
Professionals from the media and CSOs (civil society organisations) came together between 12 and 23 December 2016 to discuss citizen-led control...

February 13, 2017
Since February 2016, a total of 60 journalists from 40 different radio stations, 5 television channels and 10 online media outlets have...
Media & development