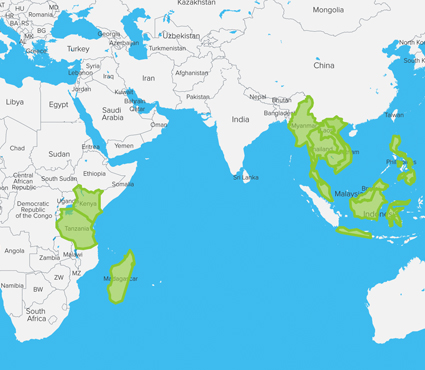 To strengthen the skills of the media as regards the coverage of environmental issues relating to climate change
To raise awareness among the media of the challenges and implications of the COP21 conference, to help the people in the countries concerned to better understand and take ownership of them
To contribute to COP21 through the presentation of local reports on adaptation to climate change, produced by journalists from Africa and Southeast Asia
810K
13months
28Participating organizations

As host to the 2015 Climate Conference in Paris, ahead of the event, France wants to instigate a positive debate, bringing people together, on the subject of the fight against global warming.
To help raise awareness of the issues posed by global warming as widely as possible, the "Media 21, Journalism and Climate Change" project is designed to inform and educate the media in East Africa, Madagascar and Southeast Asia on the challenges and implications of this international event. It aims to make climate change a topic of discussion in areas that are already suffering the effects of global warming, with a view to raising awareness among the public and, ultimately, bringing about changes in behaviour.

Through this project, the media, which have a key role in the success of the 2015 Paris Climate Conference, learn about the commitments made by the participating States, improve their knowledge of environmental issues and pass on the information in a format that can be understood by the general public.

The project also has another side: support for the media in investigative reporting on the subject of initiatives for adaptation to climate change. The reports, reflecting positive experiences implemented locally in Asia and Africa, will then be publicised alongside the 2015 Paris Conference Climate.

Verbatim
I am proud to have participated in this experience. It has been very important to us, citizen journalists, not only to improve our ability to deal with these issues, but also to reach the same professional level as other well-known media in Southeast Asia.
Anton Muhajir, founder and editor of balebengong.net, online media for citizen journalists (Bali)

Web and radio journalists selected following a call for applications attend an international scientific conference entitled "Our Common Future Under Climate Change" in July 2015 to learn about climate change, refining their methodology and preparing interviews and profiles.

A second session, before and during COP21, provides journalists with the tools to understand negotiations and enables them to develop their network of experts. They place the spotlight on issues specific to the African continent and provide fair and balanced coverage of the proceedings.

June 4, 2015
After a call for applications CFI has chosen those who are to take part in Médias 21. Attendees will receive training in how to cover climate...

June 10, 2015
On 1–11 June 2015 UNESCO's offices in Nairobi (Kenya) are staging the first training course for web journalists and bloggers from Kenya, Tanzania...

Medias 21: Meeting the scientists in Paris

July 16, 2015
As part of the second training session in the Media 21 project, bloggers, online journalists and radio reporters from East Africa and Madagascar...

The Final Countdown to COP21

November 4, 2015
With one month to go before the 21st COP21 takes place in Paris, the African radio and Internet journalists involved in the Media 21 project...

Web journalists are trained in the techniques of reporting on scientific matters.
They are then guided as they prepare an investigative report on environmental issues concerning how people are adapting to climate change. The reports are regularly published by the online media involved and on the Media 21 platform.

Radio stations are encouraged to take into account traditional aspects and local customs to enable them to raise awareness of climate issues more effectively and encourage people to implement strategies for coping with them.

May 18, 2015
On 27 April–8 May 2015, the Alliance Française of Fianarantsoa hosted the first MEDIA 21 project training workshop for ten local Madagascan radio...

Radio stations receive financial support for the production of programmes on global warming. These programmes are pooled in a programme database which can be accessed by all stations participating in the project.

A competition at the end awards prizes for the best magazine programmes, with six journalists being selected to attend COP21.

August 5, 2015
Brought together in Paris in early July 2015 for the UNESCO International Scientific Conference ( Our Common Future Under Climate Change), the...

December 15, 2015
The internet journalists, radio reporters and bloggers from East Africa and Madagascar taking part in the Media 21 project are in Paris from 4-13...

Various training sessions are held for the editors in chief of media from the ASEAN region, on:

November 12, 2015
As part of Media21 project fringe activities, and just a few weeks before COP21 in Paris, Eric Glover, the journalist and scientist – CFI project...

Training in investigative techniques in relation to environmental topics

Training broken down into three stages for the production of an investigative report on a positive local initiative in response to the effects of climate change:

Presentation of the results of investigations during the COP21 conference

A communication campaign carried out for the 2015 Paris Climate Conference promotes the investigations conducted as part of this project.

The participants selected present their own investigation and highlight the positive local initiatives undertaken in their region.