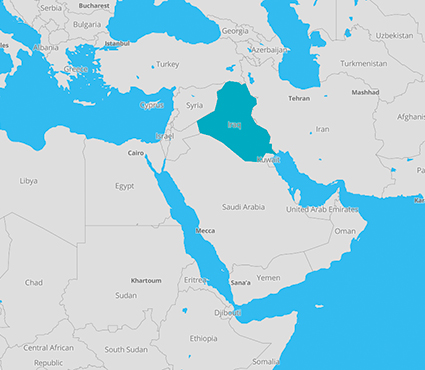 To enable the media in northern Iraq to play a part in the efforts to promote stability and social cohesion in the wake of the crisis.
310 K
20months
45Trained professionnals

In 2015 and 2016, the ILYM project brought together journalists from Iraq, Libya and Yemen to debate on the role played by the media in crisis-stricken countries. In 2018, the Tasalah (meaning 'reconciliation' in Arabic) project, which focused entirely on Iraq, enhanced the skills of Iraqi journalists and made them more aware of the issues relating to social cohesion. The 'Mosul Talks' workshops allowed them to exchange their thoughts and opinions about the numerous challenges of reconciliation.

The Tafael project ('Tafael' being an Arabic expression meaning 'to go forwards with optimism') follows in the footsteps of these two projects. It draws on the conclusions reached in the Mosul Talks workshops, which called on local media outlets to perform more effectively their assignment of educating and informing their audiences, and to become more involved in the reconstruction process. It focuses on the Nineveh Governorate in northern Iraq, where the occupation by Islamic State (IS) and the resulting battles had a dramatic impact on the social fabric (and also divided entire communities).

Today, local media outlets in the region are regarded with a sense of mistrust, and so the goals of the Tafael project are to make young Iraqi journalists more aware of the issues of social cohesion and to train them to present this subject in a positive light. By building on these initiatives, the project aims to provide the residents of the Nineveh Governorate with better access to relevant information, which will meet their expectations and forge stronger links within communities.

Verbatim
“During the trainings on the management of a website, we wrote together an editorial charter (…) This notion is at the heart of the journalist's profession.”
Saman Noah, trainer

Awareness-raising for partner media outlets, and call for journalists to come forward

October 9, 2019
The Tafael project, launched at a seminar in September 2019, will support the post-crisis stabilisation process through the media in northern...

Media and social cohesion in Iraq

February 21, 2020
18 February 2020 marked the last day of training for the young journalists on the Tafael project.

A 5-day session dedicated to a specialism chosen by the participants (radio journalism, written journalism, video journalism or photojournalism), with particular focus on the techniques for adapting content to the Internet and social networks.

Journalism and social cohesion under debate at the University of Mosul

February 8, 2021
Students at the University of Mosul have been discussing social cohesion and a group of around 15 of them have taken basic journalism training...

May 5, 2021
At the Tafael closing ceremony, held on 15 March 2021 in Erbil and attended by around 100 people, including journalists, partner media outlets...

Partnership with the University of Mosul