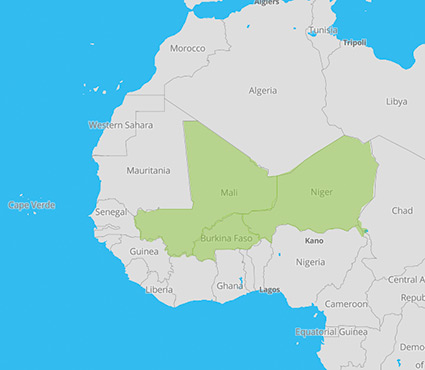 To provide reliable news to young men and women from the Sahel region, and make it possible for them to express their opinions, take part in public debates and contribute to public life in their respective countries, through the media.
8,3 M
48months
3Countries

In recent years, the Sahel region has experienced a series of multifaceted, overlapping and worsening crises. One of the factors behind this fragility is the sense of neglect, injustice and marginalisation felt by part of the Sahel's youth, with the under-30s representing about 65% of the population.

This crisis, which is sweeping across the entire Sahel-Saharan belt, cannotbe resolved without making young people feel more included in social and political circles. In this respect, the media have an important role to play by offering young people forums for expressing their opinions and promoting dialogue between citizens, civil society representatives and the authorities.

Through the media, the MediaSahel project is helping to increase youth inclusion, foster stabilisation and establish democracy in Burkina Faso, Mali and Niger. A scheme for supporting production has been planned to run during the 48-month-long project. In addition to nationwide initiatives, a regional dimension will make it easier to broadcast news and promote dialogue between those three countries, with the focus being placed on shared problems and solutions, and content being offered in local languages.

MediaSahel (PDF - 465.08 KB)
Verbatim
“Conscious as we are that the media are essential to improving understanding of a complex environment and to initiating a more inclusive and more balanced public debate, we are delighted to be teaming up with CFI to work with the young men and women of Burkina Faso, Mali and Niger to produce reliable and independent news that is both focused on their interests and sensitive to gender.”
Rémy Rioux, Chief Executive of the French Development Agency

Strengthening the capabilities of the media

> Encouraging young people to take part in interactive shows and get involved in the production of content;
> Training local trainers in journalism;
> Strengthening the skills of media professionals: the fundamentals of professional journalism, journalism that is sensitive to conflict and gender, interactive shows engaging young people, discussion shows, encouraging representatives of the State and of civil society organisations to take part in discussion shows and raising their awareness;
> Aiding the development of media outlets or new formats created by young people;
> Providing training courses on new interactive formats for the internet;
> Supporting media management teams;
> Raising the awareness of the media, regulatory bodies and civil society organisations on the issues relating to fake news and the verification of facts.


Getting to know the Nigerien youth better... in order to better support them!

March 1, 2019
At the beginning of the year, a Nigerien expert went to the young people's meeting in the Tillabéri region (Niger) in order to understand their...

How can we improve youth inclusion with the help of the media?

April 15, 2019
The three MédiaSahel national coordination committees have been meeting up since the beginning of the project to affirm their commitment to...

April 25, 2019
With funding of 8.3 million euros, the AFD and CFI, the French media development agency, are launching the MediaSahel project aimed at promoting...

March 27, 2020
In recent years, the Sahel region has experienced a series of multifaceted, overlapping and worsening crises. This instability cannot be resolved...

May 11, 2020
For several weeks, the programmes produced as part of the MediaSahel project have been adapted to the current health crisis. New content to...

The “Pas2Quartier” programme expands across Africa

February 25, 2021
Three editorial projects, inspired by “Pas2Quartier” and supported by CFI, will soon see the light of day in Burkina Faso, Mali and Niger.

February 26, 2021
Monitoring and evaluation training initially scheduled for March 2020 was provided to MediaSahel’s regional team and the project partners between...

Consultation workshops in Bamako and Niamey for media discussions

March 1, 2021
Young people from Mali and Niger, engaged in developing their regions through media projects, met with radio station managers in a two-day...

“Identifying the cornerstones of the profession”: training in the basic principles of journalism in Sahel

March 2, 2021
Between August and November 2020, MediaSahel provided training for 144 radio journalists on the fundamental rules of their profession, in Burkina...

June 24, 2021
After the basics and how to interact, MédiaSahel tackles the theme of gender and conflict. An initial training course was held in Burkina Faso...

October 8, 2021
Mediation, moderation and raised awareness. These words now mean more to those who attended the gender- and conflict-sensitive journalism...

Management training for radio station managers in the Sahel

October 10, 2021
In Burkina Faso, Mali and Niger, 30 radio stations were selected from among the 73 partner stations of the MediaSahel project to receive...

With reusable bottles and a cooler for training sessions: MediaSahel is taking a more environmentally-friendly approach

Supporting the production of content created by and for young people

> The production of news and debate programmes aimed at the young, focusing on both national and international issues, in the local languages of the priority areas and in cross-border languages (unifying languages);
> The production of content that is both entertaining and educational, focusing on international issues, in the main languages and in cross-border languages;
> Supporting the local production of interactive content and discussion shows, in French and/or in local languages;
> National competitions on new interactive and discussion formats, with production grants being awarded to three winners over the course of a year.

April 6, 2019
Since April 2019, RFI has been broadcasting two new interactive programmes, modelled on the Alors on dit quoi ? [So, what do we say?] magazine...

“So, what do you think?” A new programme for the young people of Africa

June 30, 2019
What do young people in Africa dream of? What are their initiatives in their own countries? These are the questions that the new RFI programme...

New offerings for young people on the Malian and Nigerien airwaves

the MediaSahel project presented at the “Paris Peace Forum 2019”

November 7, 2019
MediaSahel, supported by CFI – the French media development agency – and funded by the AFD, will be presented during the second edition of the...

Two days of public broadcasts with RFI in Niamey

December 30, 2019
From 17 to 20 December 2019, a consultation workshop was held in Ouagadougou with the 24 directors of the beneficiary radio stations. Twenty...

December 31, 2019
In addition to the consultation workshop that brought together actors and partners of the MédiaSahel project in Ouagadougou in December 2019, a...

After Niamey, RFI sets up in Bamako to talk to young people

March 26, 2020
Field studies undertaken in October 2019 identified key stakeholders in districts in Burkina Faso, Mali and Niger that were targeted by the...

March 26, 2020
Studio Tamani and Studio Kalangou both launched a new programme aimed at young people in 2019 that was broadcast on 72 community radio stations...

MédiaSahel rolls out a gender action plan and monitoring/assessment mechanism

April 4, 2020
These two new tools will allow gender-related issues to be fully integrated into the project and be managed more effectively from day to day.

April 28, 2020
There's nothing quite like a clever quip or a good drawing to make an impression. Damien Glez, who is offering Africa his talent to spread...

November 24, 2020
CFI is broadcasting a series of ten videos with a light and humorous tone to raise awareness among young people in these two countries of the...

February 12, 2021
This Monday, 15 February, MédiaSahel is launching a cycle of training courses for its 72 partner radio stations on producing and hosting...

She was far more than just a man. She was an aspiring woman

Jeunes Wakat… live and in public

February 26, 2021
The youth programme held its first live show in front of a large audience on 18 December 2020, capping off a year of great turmoil.

March 1, 2021
One of the goals under the MediaSahel project is to work alongside young people leading multimedia editorial projects and to start considering...

Burkina Faso’s young people include MediaSahel in their action plan

March 1, 2021
A second exchange workshop between MediaSahel’s young correspondents in Burkina Faso and the project team was held in Ouagadougou in December...

Thanks to MédiaSahel, RFI relocates to Ouagadougou to offer young people the opportunity to take the microphone

April 16, 2021
After Burkina Faso and Mali, it is now Niger’s turn to launch its cycle of training courses on hosting and promoting interactive programmes. The...

Three editorial projects inspired by “Pas2Quartier” will soon see the light of day in Burkina Faso, Mali and Niger

June 28, 2021
The main expectation of those participating in the interactivity training, which took place from 15 February to 3 April 2021 in Burkina Faso and...

October 16, 2021
Following on from last August’s training sessions, young people and media outlets have launched a series of discussions and citizenship...

October 17, 2021
Three African web media outlets have been selected to receive funding and technical support in order to promote the creation of innovative, youth...

October 21, 2021
In Niger, there are very few girls who go on to higher education, especially in the sciences. With a master’s in software engineering, Salissou...

#MediaSahel
Diara Ndiaye, host of the show "So on what?"

#MediaSahel
Diara Ndiaye and Sandy Abena, from the Abenafrica blog dedicated to Afro history and culture, in the program Amour de la lecture.

#MediaSahel
Relocated recording in Bamako (So we say what of Diara Ndiaye and Calls on the news of Juan Gomez), February 2019.

#MediaSahel
Training seminar for journalists of the show, beginning of July 2019, in Ouagadougou.

#MediaSahel
Training seminar for journalists of the show, beginning of July 2019, in Ouagadougou.