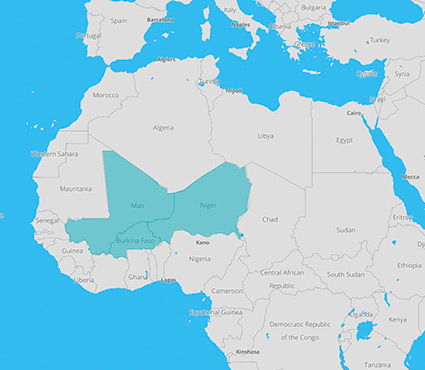 To enhance media outlets’ capacities in terms of producing reliable information, and of developing a new form of media output centred on dialogue and discourse with young people and local stakeholders.
400 K
18months
3Countries
+100Trained professionnals

Although the governments of the countries situated in the Sahel region of Africa recognise the importance of the media in conveying information and facilitating development, the political, financial and social crisis that is engulfing the entire region has had a particularly negative impact on the media outlets operating in those countries.

In effect, while the media may sometimes appear to be actively seeking to destabilise their local communities by spreading fake news or hate speech, they also represent genuine players for encouraging development and reconciliation.

By offering people a forum for expressing their opinions – especially young people, who account for over half of the Sahel region's population – the media have a part to play in facilitating dialogue between citizens, civil society representatives and the authorities. This is the overall objective of the Sahel Dialogue project, which was launched in 2018 in Burkina Faso, Mali and Niger.

Training and providing support and guidance to eight trainers

April 23, 2021
In Niger, Abdoul-Razak Idrissa, 37, is a radio journalist and journalism instructor. A seasoned professional, he is valued for having the keen...

Media and the web: journalism geared to young people

April 15, 2019
In April 2019, some fifteen journalists were trained in Ouagadougou (Burkina Faso) on developing innovative editorial content for the internet.

March 4, 2021
In Mali, at only 24 years old, Tenin Samake is the founder and editor-in-chief of the WoManager website. She promotes everyday women there...

Rolling out the Citizen Harmonies component of the Faso Media 2 project in another town in Burkina Faso (Ouahigouya): supporting local radio stations and assisting in the production of programmes centred on dialogue and local discourse through a series of activities (workshops and meetings bringing together the authorities, media outlets and civil society organisations, training courses for elected officials, civil society representatives and young people, training on dialogue-based programmes, etc.).

Following a call for proposals from the beneficiary media outlets (radio stations and websites/blogs), selecting one of the proposals for a pilot programme.