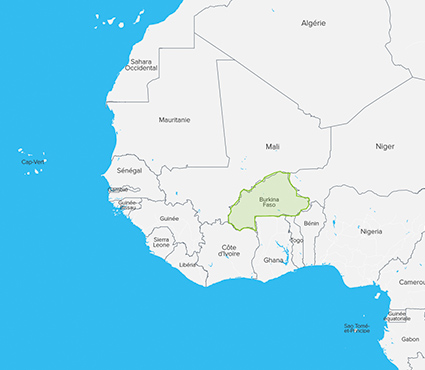 To give the media a greater role in the citizen-led control of public initiatives in Burkina Faso.
1,2 M
24months
60Interventions

Today, in the wake of the historic national and local elections that have just been held in Burkina Faso, the accountability of elected officials and decision-makers is regarded as a vital democratic necessity by increasing numbers of Burkinan citizens. The media, working alongside civil society, need to be able to understand this issue and then take stock of and report the population's expectations surrounding politics.

Launched at the beginning of 2015, the first phase of Faso Media sought to help Burkinan media outlets as they processed news for citizens and of public interest. This second phase is now aiming to give the media a greater role in the citizen-led control of public initiatives.

If the media are to fulfil this democratic function, then news professionals will need to develop a strong knowledge of the institutions and control procedures that are currently in place, so that they can provide the people with news that is relevant to them. This will also require information providers and social actors to wholeheartedly commit to greater transparency in the management of public affairs, and offer citizens platforms on which they can express their requirements.

This project is assisting both the Burkinan media (radio stations, written and online press, television stations, bloggers and political cartoonists) and civil society (CSOs, activists, citizens) in tackling these issues. It involves a series of initiatives conducted at both a national level (investigative journalism training programme, open data learning, production of civics education programmes and discussion programmes focusing on the key issues faced by society) and a local level (regional synergies, interview practice sessions, media management, and so on).

Faso Media 2 (PDF - 394.31 KB)
Verbatim
FasoMedia FM is a very good initiative, which will participate in political debates, but also to disseminate messages of awareness, so that we have peaceful elections and results accepted by all the actors.
Michel Kafando, president of the Transition (the day of the inauguration of the radio)

Making the various actors in civil society (citizens, CSOs, the media, activists) and the local authorities (political and traditional) more aware of the concepts of citizenship and accountability

Consolidating the skills of Burkinan trainers: FasoMédias focuses on teaching

February 10, 2017
Two trainer-training courses were held concurrently at the start of the new FasoMédias phase: a course for training future radio-technician...

FasoMedias 2 Key concepts in citizen-led control of public initiatives: addressing them, understanding them and implementing them

February 13, 2017
In the wake of the FasoMedias 2 launch seminar, 60 editors-in-chief, editorial cartoonists and bloggers underwent 5 days of general culture...

FasoMedias kicks off for another 24 months!

March 6, 2017
The second phase of the FasoMedias project, called FasoMedias 2, is now up and running and is concentrating on the role of the media and of civil...

March 5, 2021
At the time of the 2014 Revolution in Burkina Faso, Amélie Gue was one of the few women journalists on the front line in the field. Today, at the...

Enabling citizens, through the media and in partnership with CSOs and (internet) activists, to identify and clearly express their requirements in the public sphere and to exchange ideas and effectively discuss issues with the local authorities

In the pilot regions:

The challenge of interactive citizenship

October 30, 2017
From 11 to 23 September 2017, three training sessions on radio interactivity were held in Ouagadougou as part of the Faso Media 2 project...

Enabling citizens, and in particular young people who have first-hand experience of the power they can hold by mobilising as citizens, to become involved in devising and trialling projects that take their wishes into account

March 13, 2017
As part of the Faso Medias 2 project, which aims to give journalists and civil society a greater role in the citizen-led control of public...

March 17, 2017
Four private Burkinian channels got together, from 11 February to 5 March 2017, to compile a broadcast on citizenship during the Pan-African Film...

April 17, 2018
"One day in my media organisation" is a series of reports, which, each week, gives an account of the daily lives of people working in media...

May 10, 2018
Broadcast now for several months as part of the FasoMédias 2 initiative, citizen dialogue programmes offer a privileged space for tackling local...

Enhancing the long-term viability, management and governance of the beneficiary media outlets and of UNALFA, as project partner

Consolidating the knowledge gained during the first phase of the Faso Media project: enhancing the capacities of media outlets and local trainers, joint broadcasting of programmes, etc.

March 7, 2018
1 day in my media organisation is a new series of reports, which, each week, gives an account of the daily lives of people working in media...

The Bobo “48 hours of citizenship” event ends on a high!