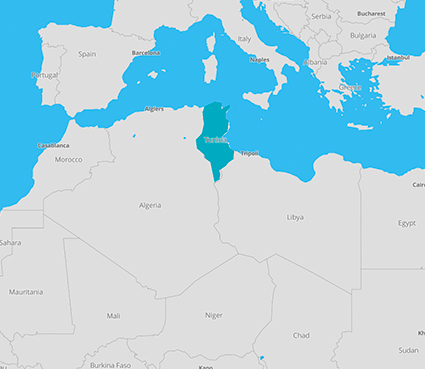 To increase journalists’ knowledge of the challenges thrown up by the 2017 municipal and 2019 legislative elections
To provide journalists, the media and citizens with the data and tools they need to understand local political life
To step up coverage of the 2019 legislative elections by a group of 15 or so media outlets in the 6 target governorates
325 K
30months
15Supported Projects

After two successful democratic votes (constituent assembly elections in 2011 and presidential elections in 2014), Tunisia adopted a new constitution in January 2014. Municipal elections, scheduled for March 2018, will mark a turning point in the nation's political, economic and institutional decentralisation policy. Legislative elections, when citizens will have to address challenges from a local angle, are set to take place in December 2019.

For the past six years, CFI has been mentoring the Tunisian media through a number of projects, particularly the Tunisian public TV station ETT, the Tunis Afrique Presse (TAP) agency, and also structures involved in the development of citizen journalism, such as Nawaat, Al Khatt and Tunisie Bondy Blog.

The Hiwar Tounsi project, devised and implemented jointly with the Tunisian Barr Al Aman Association, is helping to expand coverage of the 2018 and 2019 elections in Tunisia, and to enhance the volume and quality of information on local political life in the media. Indeed, despite the fact that the media offering generally has improved in the region since the Revolution, the local population has less access to information concerning them directly.

The actions that have been implemented will provide journalists with a guide to understanding the challenges thrown up by the elections and will promote citizens' engagement through dialogue and exchanges with elected representatives.

In Tunisia, elected officials are receiving training to better communicate with citizens

January 29, 2019
For several months, the Barr al Aman association and CFI have been providing elected representatives of six Tunisian governorates with proposals...

The Tunisian media prepare for the upcoming elections

September 9, 2019
At the end of August 2019, CFI and Barr al aman organised two training sessions in Djerba and Sousse focusing on the issues relating to the...

Providing journalists, the media and citizens with the data and tools they need to understand local political life

Dream FM: “The dream of an independent media outlet of value to citizens”

November 16, 2021
In Tunisia, there are few local media outlets, with the major national outlets dominating the media scene. Mohamed Taieb Chmengui, who founded a...

Municipal elections of 6 May 2018: journalists gather for workshops in Sousse and Djerba

April 23, 2018
Two workshops raising awareness of the issues surrounding the municipal elections of 6 May 2018 – the first local government elections since the...

April 14, 2020
In Tunisia, while the media landscape has been developing in the region since the 2011 Revolution, the public still does not have access to...

Mohamed Taieb Chmengui: Dream FM or the dream of an independent radio station for Tunisian citizens

February 22, 2021
To mark World Radio Day on 13 February, CFI is inviting you to discover more about the career paths taken by three radio journalists from the...

#HiwarTounsi
April 2018 - Awareness-raising workshops on the issues of the municipal elections of May 6, 2018.