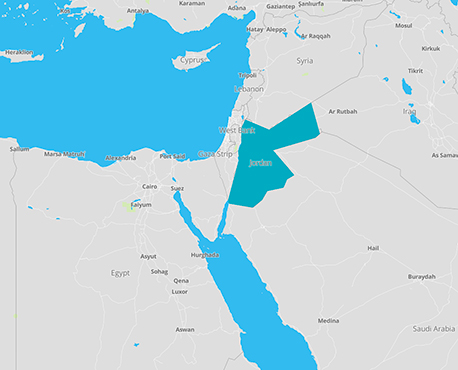 To create the conditions for more reliable, professional coverage of political, parliamentary and electoral news in Jordan.
1,6 M
48months

In the wake of the Arab Springs, Jordan has been implementing a series of constitutional and political reforms aimed at building a "dynamic democracy". These reforms are based on progressive consolidation of the parliamentary system, active citizen participation and the strengthening of political parties. In line with its strategy for promoting the rule of law, the European Union (EU) has launched a programme in support of this reform process in Jordan.

This is the context behind the project entitled JDID (EU support to Jordanian Democratic institutions & Development)– meaning "new" in Arabic – allocated by the EU to the European Centre for Electoral Support (ECES), in a consortium with European Partnership for Democracy (EPD), Westminster Foundation for Democracy (WFD), Netherlands Institute for Multiparty Democracy (NIMD) and CFI. Over the course of 4 years, it is to be implemented in collaboration with the Jordanian Chamber of Representatives, the Independent Electoral Commission, political parties and civil society organisations.

As vectors of transparency and citizen information, the media play a crucial role in the democratic process. The media segment of the JDID, implemented by CFI, includes training political journalists and also raising the awareness of elected representatives to the need to communicate with the media. It also provides support to the independent electoral commission in setting up a unit to monitor election and ballot coverage by the media.

Support for the reform of the Jordanian parliament

February 2, 2018
CFI is seeking for a Radio journalism expert (consultant, self-employed) for a project in Jordan.

Call for applications: a political journalism in Jordan

February 4, 2018
CFI has just launched a call for applications for trainings in political journalism in Jordan, as part of the EU-JDID programme funded by the...

May 3, 2018
CFI is launching a call for application targeted at Jordanian media organization, to support production and broadcasting of interactive political...

'Le Parlement': a Jordanian podcast bringing citizens and Members of Parliament together

March 7, 2019
Within the EU-JDID programme, CFI provides support for the production of a political audio programme titled Le Parlement [Parliament] that brings...

February 24, 2020
CFI is recruiting a Assistant-coordinator in Ukraine.

Interactive programmes to foster dialogue with Members of Parliament

November 16, 2021
Following on from the Arab Spring, Jordan has undertaken a series of constitutional and political reforms aimed at constructing a dynamic...

April 23, 2018
A series of training courses in political journalism was launched in February 2018.

Preparing for the upcoming elections in Jordan

December 13, 2019
At the end of November 2019, more than 250 Jordanian journalists from both the country's capital, Amman, and the provinces were trained on how to...

Journalists in Jordan undergo training on how to cover 2020 elections

February 10, 2020
In light of the parliamentary elections taking place in Jordan in the second half of the year, EU-JDID is offering advanced training in election...

Forum on the topic: "Social networks and politics".

Social networks and politics in Jordan

March 6, 2019
On 21 and 22 January 2019, a conference took place on the topic of "social networks and politics" in partnership with the Center for Strategic...

Jordanian students cover the Forum on Social Media and Politics

March 6, 2019
On 21 and 22 January 2019, in partnership with the Center for Strategic Studies of the University of Jordan, CFI organised a forum on the topic...