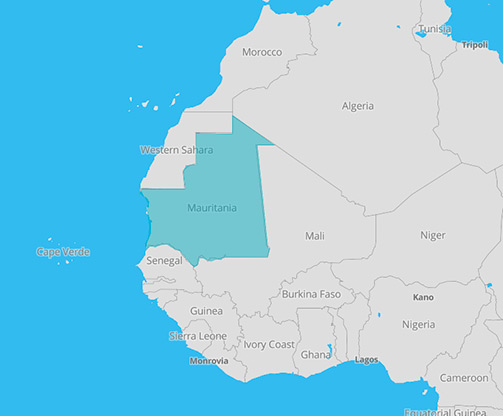 Mauritania has ratified the main international human rights treaties. However, in practice, they are still not being applied properly, notably because citizens are not fully aware of their rights.

The German cooperation's support programme entitled 'Promotion of Human Rights and Dialogue on Human Rights' (Promotion des Droits Humains et Dialogue sur les Droits Humains – PDDH) which was launched by the GIZ (Deutsche Gesellschaft für Internationale Zusammenarbeit) in 2015, covers four themes: human rights education, strengthening the technical skills of government officials and civil society organisations, public debate and legal assistance.
One of the objectives of the PDDH is therefore to promote public debate on these rights, by strengthening the powers of the media as they perform their role as 'watchdogs' and providing high-quality media coverage of these topics.

In 2019, in order to continue providing support to journalists in their mission to promote rights and equal opportunities, the GIZ tasked CFI with training journalists from public and private media outlets in Mauritania (with priority being given to the Assaba and Gorgol regions), as part of the InfoRights project.

The project is being conducted in partnership with the Directorate for the Promotion of Publishing and Press Relations of the Ministry of Culture, Handicrafts and Relations with Parliament (MCARP), the Information, Awareness-Raising and Documentation Centre (CISD), of the Office of the Commissioner for Human Rights, Humanitarian Action and Relations with Civil Society (CDHAHRSC), the National School of Administration, Journalism and Magistracy (ENAJM) and civil society associations.

Verbatim
“Journalists are not addressing the issue of victims of human rights. (…) We taught them to see and treat the word of these victims.”
Mohamed El Hani, coordinator of the InfosDroits project

A comparative look – the trainers’ perspective

Supporting the production of articles and networking

Results of the "RightsInfo" project

April 13, 2020
Mauritania has ratified the main African human rights treaties and is working to transpose its international commitments into its legislation and...

Seybane Sidi Diagana : “The Issue of Human Rights remains a Sensitive One and One that Requires a Certain Distance”

August 25, 2020
In late 2019 and early 2020, Seybane Sidi Diagana, who has been a correspondent for the Mauritanian newspaper Le Calame for around 20 years...
Media & governance