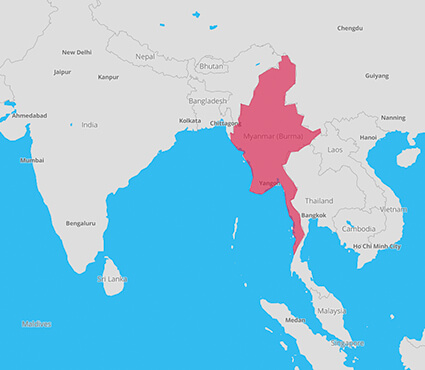 To contribute to the work of Burmese journalists to defend freedom of expression and promote the country’s return to democracy.
110 000 €
10 moismonths

The military coup d'état in February 2021, which resulted in the imprisonment of Aung San Suu Kyi and other members of the legitimate government, had devastating effects on freedom of expression and the media in general in Myanmar.

In the aftermath of this, in the light of the crackdown on the protest movement and the control of information, journalistic activities are no longer permitted. Fearing for their safety, many journalists had to leave the country, following the example of the major democratic media outlets.

Launched in partnership with France Médias Monde (FMM), “Kwanraat” (“network” in Burmese) is supporting some 20 exiled Burmese journalists by providing them with training and the opportunity to create mini documentaries analysing the factors that led to the collapse of democracy in Myanmar. These mini documentaries will then form the basis for a full-length documentary. An advocacy campaign led by the European Partnership for Democracy (EPD) will also be put in place to keep the return to democracy on the European political agenda.

10 exiled Burmese journalists based in Europe

10 exiled Burmese journalists based in Asia

Face-to-face (in France or Thailand) and online training for journalists in exile.

August 29, 2022
Launched in 2022 by CFI and FMM with support from the French Ministry of Europe and Foreign Affairs, the Kwanraat (“network” in Burmese) project...

Media & enterprise
Establishment of the Myanmar Journalism Institute (MJI), an independent school of journalism in Rangoon (Myanmar), with the support of a
Radio
Myanmar