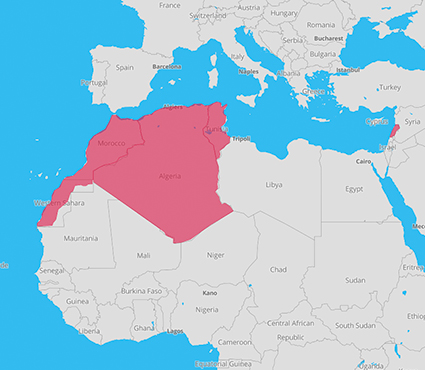 To promote the sharing of information and expertise for the purposes of the development of content in French.
To develop editorial formats that are innovative
To enhance access to this content via the use of social networks.
47months
60Trained professionnals
4Countries

While Arabic is the official national language in the Maghreb and in the Levant, Algeria, Morocco and Tunisia account for 85% of French-speakers in the Arab world, and in Lebanon almost 40% of the population is considered to be French-speaking. Multilingualism communicates a strong message of tolerance and openness to others.

In this context, Innovation MediaLab has set itself the objective of supporting Francophone media outlets in Algeria, Lebanon, Morocco and Tunisia over a period of 36 months. Each of these media outlets will be carrying out an innovative editorial project in French, in particular one aimed at those under the age of 15, at students and at young professionals, as well as at the business community. Francophone MediaLab is thus aiming to encourage the emergence of a new offering of French-language journalistic content in four Arab countries.

Innovation MediaLab falls within the scope of the “International Strategy for French Language and Plurilingualism".

Verbatim
“We need to acquire journalistic techniques and working methods to offer our young audience content that is both educational and entertaining.”
Lamia Rassi (Yomkom – Lebanon)

November 26, 2018
Following the call for applications and the shortlisting of ten editorial projects in October 2018, on 16 November, five digital media outlets...

September 17, 2019
Since April 2019, MédiaLab Innovation has been supporting the production of an innovative French-language editorial offer in Morocco by backing...

To the ballot box, citizens! The new format of the French-speaking Lebanese media outlet, L’Orient-Le Jour

April 8, 2022
L’Orient-Le Jour sought to develop a new narrative form to cover Lebanon’s general election, which will be held on 15 May. The editorial team has...

Yomkom, the Lebanese editorial offering for adolescents, is working on photo reporting

April 22, 2022
Since 4 April 2022, the four editorial contributors to the Lebanese digital media outlet, Yomkom, have been receiving training from freelance...

Should the media be feminist?

March 6, 2020
Four journalists from Algeria, Lebanon and Morocco – all beneficiaries of the Innovation MediaLab project – share their thoughts on the role of...

June 4, 2021
Since March 2021, Innovation MediaLab project beneficiaries have had the opportunity to join monthly online sessions to discover the latest...

That’s a wrap for Innovation MediaLab

July 8, 2022
The project, which provided support to five media outlets in the Maghreb and Lebanon for the roll-out of innovative narrative formats in French... #MediaLabFr
Nahla Chahal speaks about gender in the seminar held in #Beirut on February 12 and 13, 2019. #MediaLabFr
Éric Le Braz at the Innovation MediaLab, held in #Beirut on February 12 and 13, 2019. #MediaLabFr
David Rofe at the Innovation MediaLab, held in #Beirut on February 12 and 13, 2019. #MediaLabFr
And it is the turn of #yomkom in Innovation francophone, organized in #Beyrouth on February 12th and 13th, 2019.
PrevNext
Media & enterprise