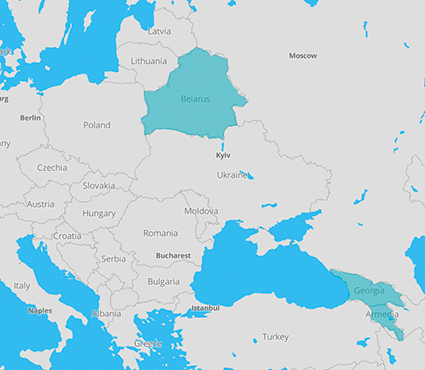 Support pluralism and the development of professional skills in online media
Contribute to the dissemination of reliable information, quality and independent
Join the action of the media with a view to developing a viable economic environment
210K
22months
4Countries
4Participating TV channels

In a region in which media bias in political affairs is still intricately linked to the identity of owner of the media, there are question marks over how objective news reporting really is. The establishment of truly independent media, with strong safeguards against interference from owners in the editorial line and the development of investigative journalism, is a major challenge in the Caucasus and Eastern Europe.

In the 2014 edition of the Press Freedom Index, Georgia and Armenia were among the top four for the region again this year. Although pluralism stands at a good level and State censorship is relatively restrained in both countries, the strong polarisation of their societies is reflected in the media landscape and the working environment for journalists, who often come under attack from various pressure groups. With the political orientation of the media still largely correlated with the identity of their owners, guaranteeing editorial independence remains a major challenge.

The same questions surround editorial independence in Eastern European, specifically in Belarus and Ukraine, where the principal media are becoming increasingly concentrated in the hands of oligarchs close to the government, with a growing number of acts of violence against media professionals going unpunished, intimidation against independent journalists, etc.

More than 20 years after independence, media freedom remains a major concern in this region of the world. With very few media enjoying financial autonomy, restrictions on editorial independence are widespread. In such crucial political and social times for their countries, journalists are increasingly turning to the new opportunities offered by the Internet. Will the emergence of new alternative media be the saviour of pluralism for those in exile?

Verbatim
“4M Caucasus provides answers to key challenges currently facing Netgazeti: insufficient funds to redesign the website, the search for a new business model and the need for improvement in terms of data journalism and multimedia. This programme has already enabled us to find new sources of income.”
Nestan Tsetskhladze, manager and editor in chief at Netgazeti

Needs analysis and validation of paths of action

October 13, 2014
In the wake of the November 2013 4M Forum in Tbilisi (Georgia), CFI set up the #4M Caucasus project to support the production and dissemination...

Strengthening the skills of journalists

For media in the South Caucasus, training sessions lasting between 1 and 5 days are held on the following themes:

October 13, 2014
In the wake of the November 2013 4M Forum in Tbilisi (Georgia), CFI set up the #4M Caucasus project to support the production and dissemination...

How are data created?

February 2, 2016
The important (and sometimes fatal) first question that needs to be asked.

December 10, 2015
At the end of 2015, the Georgian online news outlet Netgazeti is benefiting from training sessions on Google Analytics / Longform and data.

This new conference held at the end of 4M project provides an opportunity to review the activities performed over the period with each partner. New media stakeholders in the region are also invited to attend to promote exchanges of good practices between experts and journalists, stimulate new strategic approaches and even initiate joint projects.

“Online media outlets: How can they grow their audience and find new sources of income?”

September 9, 2015
From 7 to 11 September 2015, CFI will be welcoming the four media outlets involved in the 4M Caucasus project at the Multimedia Education Center...