What impact has the COVID-19 pandemic had on the media and journalists?

CFI has published a study into the impact of the COVID-19 pandemic in Morocco, Algeria, Tunisia, Libya, Egypt, Sudan, Lebanon, Jordan, Syria, Palestine, Iraq and Yemen.

The COVID-19 pandemic has had a significant impact on the media sector and on journalists.
At the global level, based primarily on documentation and summary work, we have observed a resurgence of attacks on freedom of expression and an increase in risks to journalists and, in the countries covered by this study (Morocco, Algeria, Tunisia, Libya, Egypt, Sudan, Lebanon, Jordan, Syria, Palestine, Iraq and Yemen), five trends have emerged:
> numerous arrests of journalists;
> the introduction of specific legislation on the dissemination of misinformation;
> the introduction of states of emergency;
> a form of censorship of the media by the authorities;
> the cessation of the print media.


However, it is important to emphasise that there were pre-existing crises in all these countries before the pandemic. The pandemic has further accentuated existing dysfunctions. We have collected data on the countries targeted by the study by means of an investigation into the socio-economic impact of the pandemic on the media and journalists. Our analysis is based on 19 case studies conducted with media stakeholders in nine countries, as well as an anonymous questionnaire that was filled in by 74 journalists.

“During the three months of strict lockdown, people stayed at home in front of their screens and wanted to follow the news, which brought about an increase in the audience across all media platforms”.
A journalist from Dooz, a Palestinian media outlet

We have identified a number of general trends:
> the financial resources of media outlets are declining due to a decrease in advertising revenues and income coupled with an increase in production costs. This situation has a direct impact on journalists whose overall income has fallen;
> audiences are increasing globally;
> content is changing in terms of its form due to technical limitations and also in terms of its substance. We are therefore seeing an increase in the proportion of content with an awareness-raising element, as well as an increase in content that is scientific in nature. In terms of volume, information production appears to have increased in particular;
> new approaches to journalism and new journalistic practices have been adopted, particularly when it comes to methods of accessing sources of information;
> the mental health and safety of journalists appears to be worsening;
> the media and journalists remain committed to their mission of providing information.

Based on the trends identified, we are proposing a set of five operational recommendations aimed at improving the resilience of the media in the face of the current developments and improving the quality of work of journalists and the information disseminated to populations in the context of the pandemic and beyond:
> complete the digital transition;
> strengthen journalist and/or media networks;
> combat gender-based wage inequality;
> promote the psychological well-being of journalists and combat cyberharassment, particularly where the victims are female journalists;
> promote financial support that is more flexible;
> introduce monitoring of changes to freedoms. 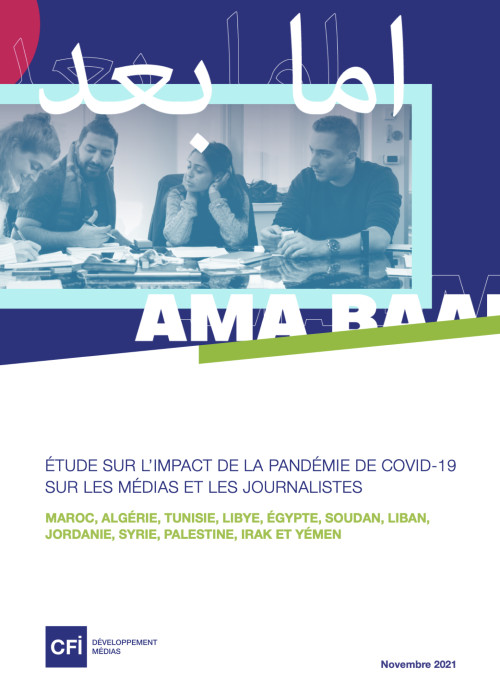