CFI is forming a temporary editorial team consisting of 17 African journalists who are being drafted in to cover the sixth African Union - European Union (AU-EU) summit, which will be held on 17/18 February 2022.

A number of media and news professionals from the French media development agency will provide support to this brand-new team of young English-, Arabic- and French-speaking journalists. This project provides African media outlets with access to Africa-centric content that covers the summit.

A temporary editorial team to cover the AU-EU summit

Europe’s media will be out in force to cover the AU-EU summit in February 2022 – a summit which will unite African Union and European Union leaders so that they can set strategic priorities and approaches and define the joint policy vision for both continents.
The French media development agency CFI is forming a temporary, trilingual editorial team to cover the summit so that native Africans can follow news from the event via information produced by African journalists.

The three languages of English, Arabic and French provide the basic structure for this temporary, gender-balanced team, which will comprise 17 journalists who have received recognition for their ability to cover international news stories or specific issues such as climate change and the manipulation of information.
Several journalists selected for the project have taken part in CFI projects. These include Zahara Abigaba, a Ugandan journalist who specialises in environmental issues and is receiving assistance as part of the Dunia project or Bakary Traoré, a fact-checking journalist from Côte d’Ivoire who is receiving Désinfox Afrique project assistance.

‘Sharing’ is a concept that is intrinsic to journalism and one around which CFI intends to build this new project. Although the members of the editorial team 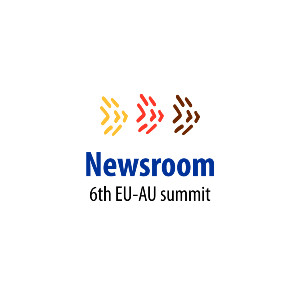 will produce articles and reports for their own media outlets, this content, some of which will be translated into Portuguese, will also be shared on the content distribution platform Medium.
Consequently, the journalists’ reports and created content will all feature on a dedicated page online. This can be accessed by media outlets that would like to use those resources to populate their own channels or news feeds and social media accounts.
This initiative of sharing is consistent with CFI’s commitment to its media partners and the professionals whose efforts keep those partners operating every day. Using the Medium page to share journalistic content will broaden and consolidate the space for information that can be accessed by as many people as possible, and it will also give that space credibility.

The journalists will attend a series of masterclasses in Brussels with experts, legislators and political and institutional representatives from both Africa and Europe three days before the summit starts. These meetings will help the journalists to gain as much knowledge as possible, ahead of the event itself, about how EU and AU institutions function, the relations between the EU and African nations, and the main issues to be addressed at the AU-EU summit. Sustainable development, climate change and the European Green Deal will be among the concepts clarified. These concepts will be central to the themes to be addressed at the summit.