In Kenya, journalists are warning of the effects of climate disruption

WEB
Radio
TV
This content belongs to this project Dunia

Deforestation, drought, pollution... Since the launch of Dunia in December 2019, several reports on the effects of climate change have been produced and disseminated by the Kenyan media outlets that are beneficiaries of the project.

The television station from Nation Media Group, the leading media group in East Africa, disseminated a report on the effects of deforestation in Kenya: “Eden Lost ”. This report highlights the impact of deforestation and drought on the Maasai people, a semi-nomadic population of farmers and warriors in Kenya and Tanzania. These communities rely on pastoral agriculture for their livelihood and are therefore directly threatened by the consequences of climate disruption and, in particular, diminishing rainfall.

The report was produced by Sheila Sendeyo and Robert Gicira, two journalists benefiting from support from the Dunia project. Since the launch of the project in December 2019, these journalists have produced several stories, disseminated on Nation Media TV in particular, on pollution in Lake Victoria and the impact of climate change on the Ewaso Ng’iro river near the border with Tanzania.

Other content, produced by Kenyan journalists trained in environmental investigative techniques have recently been disseminated, in particular radio reports in Swahili on RFI and even a story on fishermen in the south of Kenya in Science Africa. 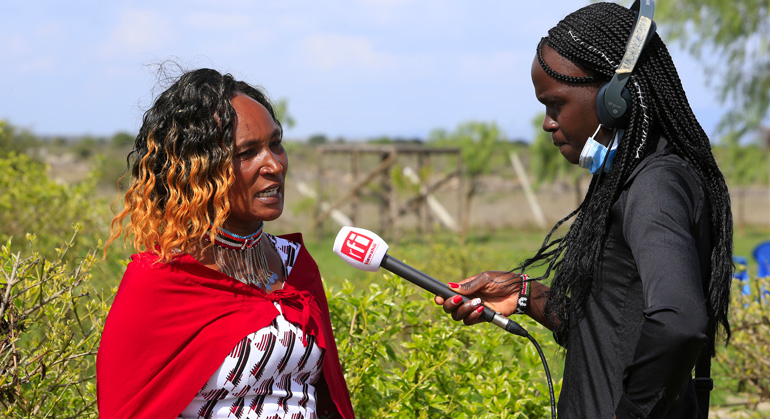 Call for applications for “Desinfox Chad”: contribute to reliable, objective and independent information in Chad

Haraket call for applications: production project accelerator in the Maghreb