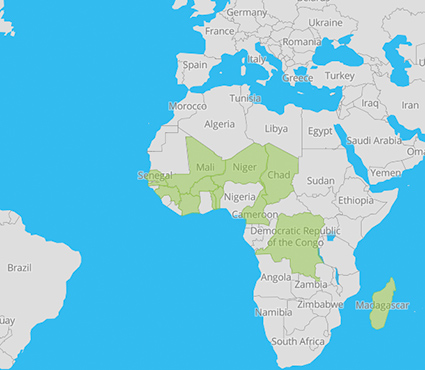 To get civil society more involved in debates on public policies by better harnessing open data and spreading its use amongst the key players in civil society.
600 K
18months
12Countries

CFI has been actively promoting citizen-led digital innovation since 2012, and in 2016, to mark the Open Government Partnership (OGP) summit in Paris, it helped fifty journalists and leaders of CSOs in French-speaking Africa, the Arab world and South-East Asia to use open data for the very first time, through the OpenData Media project.

In the months following that project, the beneficiaries have familiarised themselves with these new tools and have launched initiatives in their own respective countries aimed at freeing up public data and using it to benefit citizens.

OpenData Media 2 is following in the footsteps of that project. It will require close collaboration with the actors on the ground, so that tools can be offered in order to make use – especially for journalistic purposes – of open data adapted to the local technical constraints of the participants: a form of 'low-tech activism'

By training around twenty African journalists and CSO leading figures, this project will help to create a network of local actors instilled with good digital practices, which will be incorporated into the global open data ecosystem.

Verbatim
I was able to discover the power of data in the practice of investigative journalism, in order to make the subjects investigated more credible. I have now mastered my computer as a comprehensive and effective work tool.
Gaston Sawadogo, beneficiary of ODMedias 2

Enhancement of the participants’ technical skills

Following an appraisal of what has been learnt, an introduction to new tools making it possible to bring data projects to fruition more autonomously and to start working together on platforms for cataloguing open data.

This training course steers the participants towards technical and organisational independence when it comes to data and dissemination (website, communication, interface, etc.).

July 27, 2018
A delegation of journalists from 12 French-speaking African countries attended the Open Government Partnership (OGP) summit, which took place in...

In search of open government: 3 questions for Satou Annick Kante

August 16, 2018
Born in Benin in 1996, Louis-Nino Kansoun was the youngest of the data activists who travelled to Tbilisi (Georgia) to attend the Open Government...

The first session will involve meeting leading figures in the open data universe. Group work will be organised amongst the participants, during a digital event for reinforcing the progress of the network.
The second session will make it possible to finalise the setting-up of the network of African 'data activists' during an event connected with digital innovation.

This stage will consist of an appraisal and feedback session. The content will be put together with the participants, in order to give them the skills they need to ensure the long-term future of the network and make their projects achievable.
It will also make it possible to identify the ways in which CFI, the members of the network and the network itself can work together in future initiatives.

February 5, 2020
Between August 2017 and December 2018, CFI provided training to some 20 journalists and CSO members from French-speaking Africa specialising in...

March 23, 2020
In 2017 and 2018, CFI provided training to some 20 journalists and civil society organisation members from French-speaking Africa specialising in...