Training as a starting point for the fight against misinformation

With information tampering on the rise, it is essential that journalists be trained in the use of fact-checking tools and techniques. CFI has been working on this for a number of years now through a range of projects.

According to the most recent edition of Data Never Sleep, internet users around the world carry out an average of 5.7 million Google searches, publish 694 hours of video on YouTube and tweet 575,000 times every minute. With close to 5.2 billion internet users worldwide, information is spreading faster than ever. The same is true of misinformation.
Faced with the increasingly prolific sharing of false information, it is now essential that the general public and journalists alike be trained to carry out fact checking. This umbrella term encompasses a set of practices and tools that can be used to verify the accuracy of information.

Committed to promoting qualitative, fair and verified information, CFI trains many journalists to perform fact checking with the aim of stopping misinformation in its tracks in the regions in which it is active, mainly in sub-Saharan Africa, the Mediterranean and the Levant. In order to achieve this, the projects run by the agency include a number of actions: training of journalists to use fact-checking tools and techniques, deployment of local and regional networks of fact checkers, coaching sessions, help to produce new formats dedicated to fact checking, etc.

Since October 2020, the Desinfox Africa project has been pulling many levers, all aimed at supporting the media in six French-speaking African countries in the consolidation of their knowledge of fact checking and its integration into their editorial model.

“The latest session, held in Dakar, was very informative and important; it provided me with concrete tools that I can now use in my work as a journalist. During the course of the training, I acquired fact-checking reflexes”.
Amadou Ba, journalist – Innovafrika (Senegal) 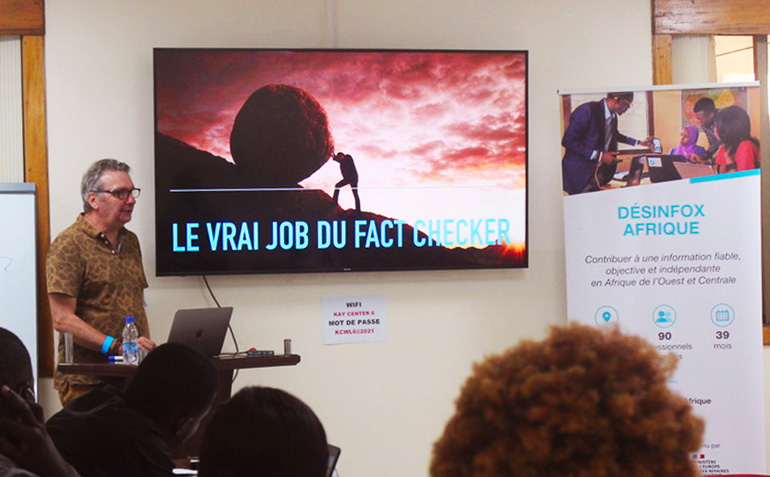 In order to plan beyond the projects and to establish the permanent use of fact-checking methods, CFI trains professionals who already have experience in the field and who can, in turn, become trainers specialising in fact checking. This was the case in particular for Paul-Joël Kamtchang, a data journalist who became a master trainer on the issues surrounding misinformation in Cameroon and the Central African Republic.

“As part of my activity as a trainer in fact checking against misinformation, I am currently semi-independently supporting ten or so journalists in the Central African Republic with the support of local coaches. Among other things, I help them to think up and create content dedicated to fact checking and I teach them how to break down hate speech, which can circulate very quickly online. There is still a long way to go in the fight against misinformation, but I am proud to be playing a part in helping journalists and the media in this regard”.
Paul-Joel Kamtchang, data-journalist, CFI trainer in Cameroon