Narjess Khinini is a Tunisian journalist at Jawhara FM. Having worked in radio for 25 years, she has experienced all the changes in Tunisian media from the inside.

Former law student Narjess Khinini was still very young when she joined the world of radio. To her great surprise, she was hired at the age of 22, after a competitive recruitment process, to work for Radio Monastir, a Tunisian public radio station. Over a ten-year period, she explored different journalistic formats including interviews, reporting, vox pops and breakfast shows. In 2005, she was asked to join a new private radio station, Jawhara FM, based in Sousse, in east-central Tunisia.

Leaving the comfort of public media was a challenge for the journalist, however she really appreciated the greater margin for freedom enjoyed by private radio stations. Initially, Jawhara FM was focused more on entertainment, culture and music but very gradually started exploring societal topics with a more political angle.
Then came the revolution in 2011. While the editorial line has barely changed, in Khinini’s view, “the window of opportunity for freedom then widened.”
The media can tackle more political and religious subjects, to the extent that Tunisian men and women dare to raise issues of personal freedom on air, which can be a source of concern for the journalists. In this context, she believes the training courses for journalists, such as CFI’s 2014 Shabab up ! Radio project, have been very useful, providing markers and tools to perform their job within a young democracy. 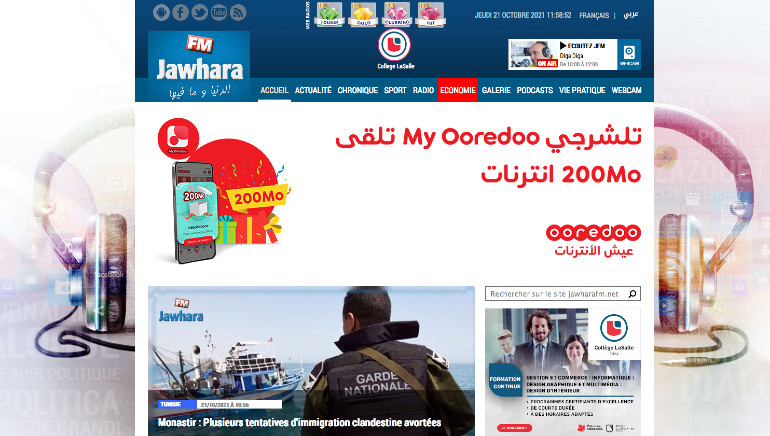 Today, the main challenge for radio is to adapt its editorial line to listeners’ new demands and expectations. Khinini believes local private radio stations have an important role to play in Tunisia’s rapidly changing media scene.

Tunisian women are not used to stagnating. They’re always dreaming of something better, of improving. For me, it’s time to make the most of my professional experience to develop within the media.

Indeed, while public radio stations have made efforts, they have had greater difficulty following this wave of freedom and have remained “weighed down by procedures and laws”. She feels particularly strongly about one issue: fighting as a woman to ensure “we do not lose our established rights and that we hold on to the ground we have gained, which is being whittled away day by day.”