A second workshop on ‘Refugees’ Stories Coverage’ was held from 1-4 December 2021 in Amman, Jordan, in cooperation with the Al-Jazeera Media Institute Training Center.

Sixteen Syrian and Jordanian journalists were chosen to participate in the training from a pool of 1,300 applicants. Eight male and eight female journalists from six governorates: Amman, Irbid, Karak, Ajloune, al Mafraq and Zarqa, participated in the training. The training aimed at introducing the concept of Refugees’ related journalism and reporting. UNESCO developed a handbook for “Reporting on Migrants and Refugees” and Al Jazeera Media Institute developed the following media training course: “Covering Refugee Stories”.

The following topics were presented: legal classification of refugees, refuge and immigration laws, sympathetic journalism, proper terminology, logistics needs and safety measurements in the field. Additionally, the preparation procedures for the production of refugees’ stories, and the principles of conducting interviews with them, were discussed thoroughly. It also stressed the importance of journalistic principles, journalistic ethics along the exclusion of discrimination and hate speech against refugees.

Expressing the voice of refugee populations

A journalists’ role is highly important, especially in communities that received refugees who suffered from the influxes of wars and conflicts. They could express the voice of refugees, and the ones who are able to highlight the formidable issues that refugees face during their refuge. Hence stems the value of the training, and the need to equip journalists with the essential tools and knowledge to cover refugees’ stories in a professional manner. Moreover, covering stories and shedding lights to issues faced by refugees in an ethical and transparent manner could have a positive impact in social cohesion.

I was so lucky to have been part of this training. This training allowed me to interact and exchange opinions and ideas regarding what has been published in media about refugees through group work. Tackling the positive and negative aspects of refugee reports presented in media, made me more capable of producing professional reports about refugees without committing the same mistakes of other journalists.
Alaa Al Qasem - A female Syrian Journalist - Blumont Humanatarian Organization - Media department. 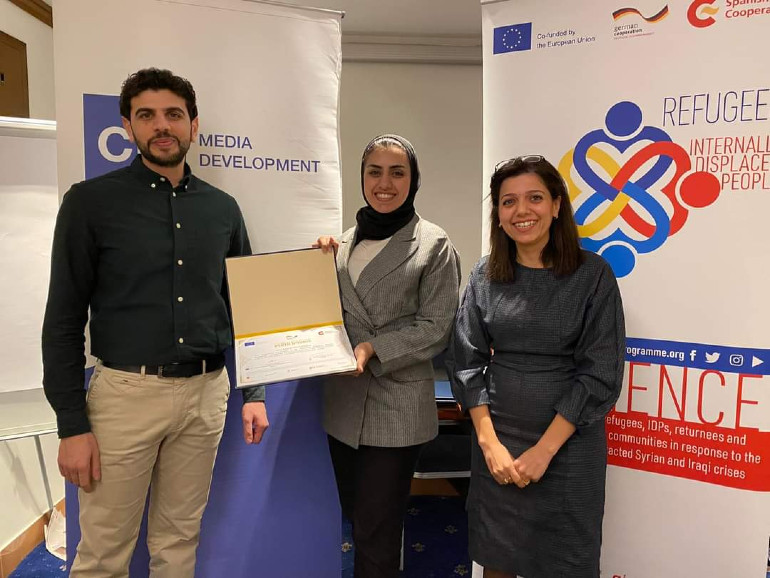 Covering refugees’ stories requires knowledge of refugees’ laws, awareness of proper wording, and professional interviewing skills to produce high quality reports and articles that are far away from prejudices and intolerance.

I’m really thankful for being part of this amazing training. I was able to grasp the appropriate knowledge, tools and skills of covering refugees’ stories in an ethical and professional way. Through this training, I was introduced to ‘Sympathetic Journalism’, and how to avoid hatred speech while writing an article.
Shefaa Qudah - A female Jordanian journalist - Freelancer

According to UNHCR, Jordan host nearly 700,000 Syrian refugees. This is why it is crucial to integrate refugees within the host community to avoid tensions and social conflicts. Professional coverage of refugees’ stories will impact the lives of refugees and host communities positively.

This training was a great opportunity to meet Syrian journalists who live in Jordan, and exchange expertise and practices. This training was a proof that social cohesion already exists between Syrians and Jordanians.
Bassam AlKarme - A male Jordanian Journalist - Freelancer 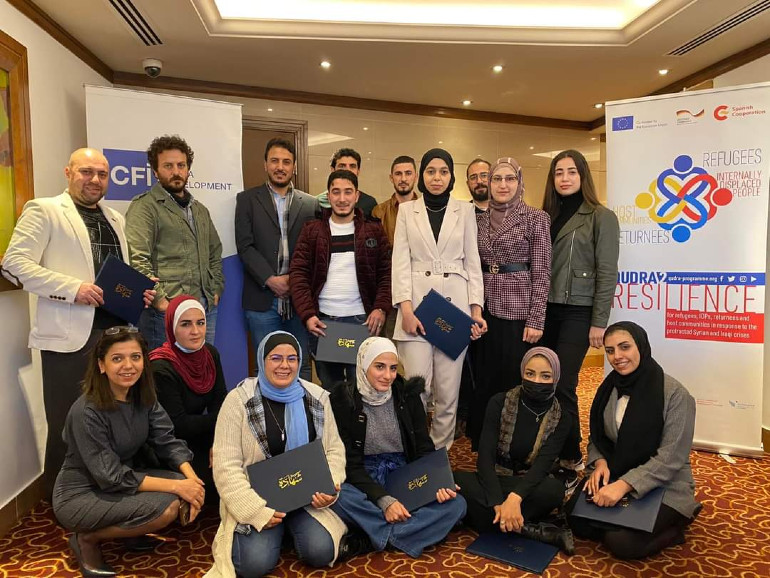