Successful press lunch in Douala to present two surveys on gender inequality in Cameroon. Authorities, media outlets and representatives from civil society attended and shared the work carried out by six journalists.

On 15 February 2022, a press lunch was held at the Bano Palace Hotel in Douala to present the results of two collaborative data journalism surveys on gender inequality. Conducted as part of the Medialab for Women project, nine months of research went into gathering data and testimonies for these surveys prior to their publication by partner media outlets in December 2021. They were supervised in Cameroon by two experts: Paul Joel Kamtchang (ADISI) and Madeleine Ngeunga (Open Data pour Elles). (Open Data pour Elles).

The first survey focused on the difficulty of including women in the implementation of agricultural policies in Cameroon. It was conducted by Ghislaine Deudjui (Le Financier d'Afrique), Emmanuel Batake (Le Financier d'Afrique), Emmanuel Batake (datacameroon.com) and Yannick Assongmo (Le Jour).
The second survey looked at the impact of Priority Education Zones on the schooling of young girls. It was conducted by Alexandra Tchuileu Ngangom (Cameroun Tribune), Edmond William Fotso Fonkam (schoolmapcm.org, 237online) and Marie Louise Mamgue (datacameroon.com).

The meeting attracted a large audience. Twenty or so media outlets were in attendance, representing every format, together with representatives of the Cameroonian and French authorities, civil society stakeholders working on gender and human rights issues and journalism students from the University of Douala and the University Institute of the Gulf of Guinea.
Other notable attendees included the regional delegation of the Ministry for Women’s Empowerment and the Family, the regional delegation of the Ministry of the Economy and representatives of the national office of the Civil Registry. Representatives of the French Institute of Cameroon also attended the lunch. 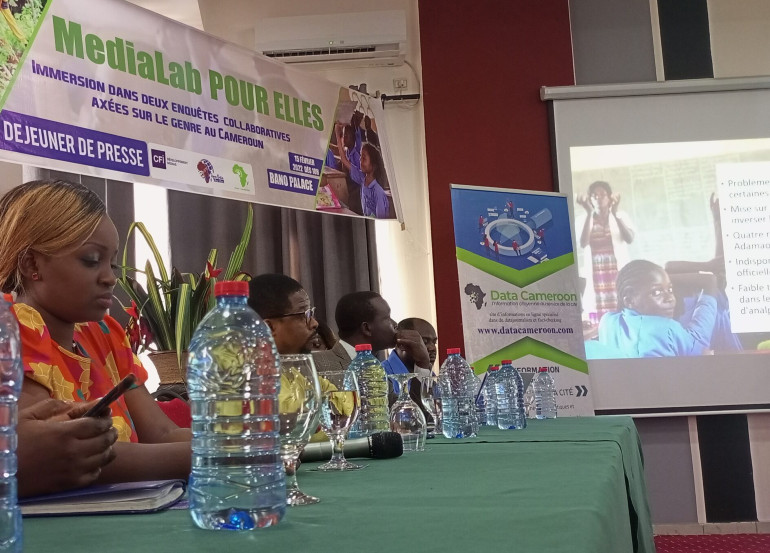 Initially scheduled to last two hours, the event was extended to allow time for questions from the audience and a very constructive debate on the new investigative possibilities offered by data journalism. It was widely reported on in the media: La Nouvelle expression, Cameroun Tribune, HorizonCamer.com, tallartistik.com, the blogger Armelle Sitchoma…
A report was broadcast on the television news on 16 February by (CRTV).

CFI would like to thank the organising team, Paul Joel Kamtchang and Madeleine Ngeunga, the journalists and partner media outlets and all those who attended this event.

We were taught how to master the tools that allow us to analyse these enormous reports and to use the data to tell a story. The collaborative aspect should also be emphasised. When working with peers, we can all tackle the same subject, even if each individual has their own editorial position
Alexandra Tchuileu (testimony broadcast on the CRTV television news on 16 February)