Four investigations into gender inequality published in Madagascar and Cameroon

When data-driven journalism is used to combat gender inequality, this produces fascinating investigations that challenge existing ideas. A look back at four investigations published in late 2021 by ten media partners.

In March 2021, 24 journalists (including 13 women) and their media outlets in French-speaking Africa embarked on collaborative investigations into gender inequality as part of the MediaLab pour Elles [MediaLab for Women] project. Following a three-week introduction to data-driven journalism and how to approach the subject of gender, these journalists received pedagogical and technical support from a team of 11 trainers.

This research, which involved the collection of both data and testimonies, has borne fruit in recent weeks in the form of a number of fascinating publications. The articles focusing on Valifofo, the forced marriage of children, have rekindled the debate on this practice, which is still common in southern Madagascar. The investigation by Elise Nandrasanela, Nadia Raonimanalina and Perle Ratsimbazafy was published by MalagasyNews and Malina.
An audio report was also broadcast on Radio Tsiry. 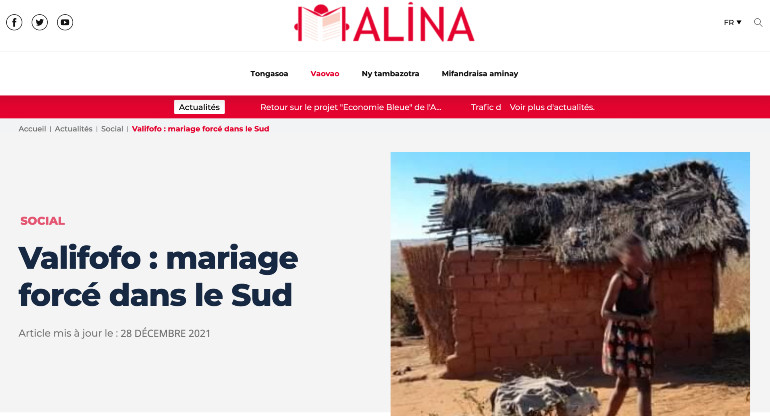 In its 14 December 2021 issue, L’Express de Madagascar published a special report entitled “Promoting the participation of women in politics”. The investigation was conducted by Léonard Razafindrasetra, Seth Andriamarohasina and Dina Andriarimanjaka.

On 13 December 2021, Le Financier d'Afrique, Le Jour and datacameroon.com published an investigation looking into the consideration of women in the implementation of agricultural policies in Cameroon. The investigation was conducted by Ghislaine Deudjui, Emmanuel Batake and Yannick Assongmo.
Alexandra Tchuileu Ngangom, Edmond William Fotso Fonkam and Marie Louise Mamgue focused on the impact of priority education zones on the schooling of young girls in Cameroon. Their articles can be found online on the Cameroun Tribune, schoolmapcm.org, 237online and datacameroon.com
websites.

Four other investigations are due to be published in Niger and Côte d'Ivoire in January.

CFI would like to offer its congratulations to all of the journalists and media partners, as well as to the pedagogical team that supported these investigations throughout 2021.