This public discussion about the Pravo project in Ukraine also raised questions such as the place of justice journalism in the current media landscape and how to bring to the audiences compelling stories about courts and justice.

The Lviv Media Forum (LMF), created in 2013, is Ukraine's most important media platform, one of the largest media forum in Central and Eastern Europe, gathering every year in the capital of Western Ukraine journalists, media professionals, stakeholders and official representatives from a wide range of countries.
After a break in 2020 caused by the Covid-19 pandemic, the LMF took place in Lviv on 26-27-28 August 2021.

On the second day of the event, CFI invited the participants to a discussion centered on the following question: What should a journalist look for in the courts?
And about the state and development of justice journalism in Ukraine.

It will not be as in France, said Milan Zaitsev underlining that the true-crime stories are most popular with French readers and listeners. The Ukrainian landscape is different, but the idea remains the same – to present a wide spectrum of stories in a quality and attractive way.

Serhii Andrushko, evoked the current challenges that court reporters are facing. He inspired the participants by showing that it's possible to tell interesting stories about the lives of ordinary people in which something started to go wrong, and to treat heroes in this way is the essence of the genre.
Serhii added that there are plenty of such stories in open court registers and during court hearings, the journalists just need to want to catch them.A journalist should not have a gender, a religion or a passport.

Panel participants presented the first podcast series in Ukraine covering true-crime stories Колючі ріжучі (sharp items, in Ukrainian) produced by the online media Graty, one of the beneficiaries of the Pravo-Justice project. This relatively new and popular format allows to reach a wider audience and to tell incredible stories about ordinary people and everyday justice in the country.

Anton Naumliuk, editor-in-chief of Graty, emphasized several points:
A journalist should not have a gender, a religion or a passport. I exaggerate, of course, but in general this is true. I never tire of repeating it, he told while discussing the issue of differentiating the journalistic and activists’ work.
The "internal" difficulties: in 99% of cases, the litigants perceive a journalist in court as an opponent or an ally (often justifiably, which of course is far from journalism) with the possibility to buy him, entice or intimidate. But there is nothing you can do about it, except to explain and to show by examples in a long and difficult way. 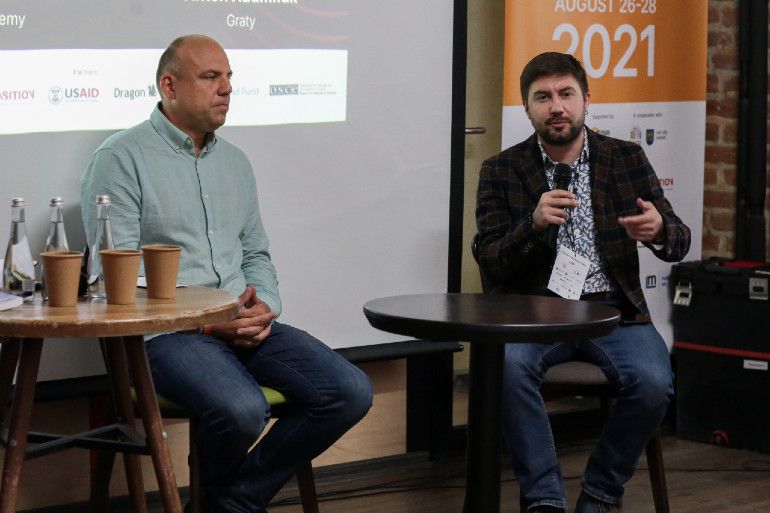 Although justice journalism as a separate genre is at an early stage in this country and despite various problems, the panel wrapped up the discussion on a positive note, emphasizing the great achievements in terms of working conditions, compared to most of the post-Soviet neighbors. The participants noted that Ukraine already has two media focusing exclusively on justice issues, Graty and SudReporter, which somehow serve as "justice news agencies" for the rest of the media landscape.

I once said and often repeat it that I feel myself in the center of a hurricane: everything around is rushing and falling apart, while we are here, as if in an oasis, working in relative peace and comfort. This is not the merit of the authorities, but rather the merit of society and the journalistic community that are defending their boundaries. Even if they do not always understand this value, told Anton Naumliuk.