“News of the Arab Spring really spurred us to support this democratic surge.”

Benoit Califano has been the Director of the media training and consultancy organisation, ESJ Pro Montpellier for 12 years, having worked as an ESJ trainer in Lille and Montpellier. He has also made TV documentaries for France 5 and Arte and worked as a journalist at France Inter.
He talks to us about the training projects run by ESJ Pro Montpellier since 2011 with young journalists from the Arab world. 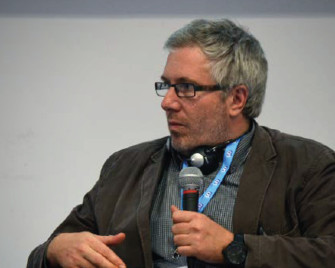 In the aftermath of the Arab Spring, a dual challenge arose, with the emergence of two different journalist profiles.
Benoit Califano explained that “firstly, there was a host of somewhat dissident youths, ever-present on social media and in the alternative press, with a strong desire to develop a more professional approach. So, this generation, who had received no journalism training and who were going to make a place for themselves in the country’s media, needed support and guidance. Secondly, there were journalists who had not practised free journalism for years, such as in Tunisia, under Ben Ali’s regime, and who needed to ‘refresh their professionalism’.”

So, ESJ Pro Montpellier launched projects in Tunisia and Algeria to get journalism schools working with vocational training schools with a hands-on approach. In both countries, curricula needed an overhaul, with courses including practical workshops dispensed by vocational teachers. The school worked on this aim in Tunis with the Institute of Press and Information Sciences, IPSI, and, more generally, on training courses for trainers, throughout the country, focussing in particular on the Internet and investigative reporting.
The CAPJC (African Centre for the Development of Journalists and Communicators) launched a 1-year course leading to a diploma in local news, in partnership with CFI. Run by trainers from ESJ Pro, the course catered to young journalists, with the purpose of nurturing professional development as they geared up to enter the workforce.

In Algeria, ESJ Pro also worked on overhauling the curricula at ENSJSI, the Algiers school of journalism. A partnership agreement was signed to facilitate their cooperation with the authorities. The syllabus included several courses for trainers and production workshops with students. As an example, a group from ENSJSI covered the Algiers Book Fair from a newsroom set up specially for the occasion.
Everything they produced was then offered to media partners. In addition to getting the worlds of education and media to work together, emphasis was also placed on consolidating hands-on workshops alongside lectures. As the head of ESJ Pro Montpellier explained: “We had trainers working in pairs, one from the media, one from the school, to encourage skills transfer. We applied this approach with the Algerian public radio, which wanted to train its young journalists. In-house journalists were trained so they could, in turn, train other journalist colleagues.”

“At the school, we’re convinced that democracy
can only be built if underpinned by three well-consolidated pillars: training, freedom of the press
and good-quality news.”

With CFI’s support, ESJ Pro also cooperated with Jordan’s journalism schools on training projects for trainers, including hands-on vocational workshops in the courses. Parallel to this, journalists received vocational training in new media and new online practices.
“News of the Arab Spring really spurred us to support this democratic surge. This young generation of journalists were bearers of great hope in terms of freedom of the press and news quality”, Califano commented. “But to some extent, reality caught up with us all and we have yet to attain our goals, whether in terms of media or rising to the challenges of democracy.” One thing to have survived, however, is a very strong link, forged over the years between these journalists on either side of the Mediterranean.