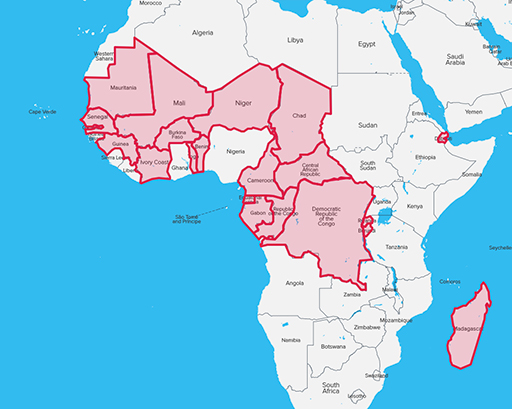 To promote the creation and development of an ecosystem bringing together journalists and developers with a view to inventing tomorrow’s media.
To play a part in training up teams capable, at all levels (editorial, technological, managerial, economic), of helping to create tomorrow’s information products/services.
380K
6months
70Trained professionnals

CFI launched the Innovate Africa project in 2014 in order to help a new generation of African media professionals to create and develop innovative information products and services in line with advances in technology, usage and the expectations of the continent's citizens.

Since then, the situation has changed dramatically in the countries of French-speaking Africa. Ecosystems centred on innovation have been developed in most capital cities in Western and Central Africa, and organisations for assisting start-up projects have been set up. Events are organised centred on founding new enterprises and developing new products or services in the new technologies sector. There are now even more investors, and schemes for providing financial support to fledgling companies are being started up in several countries.

Following on from the initial project, Innovate Africa – Entrepreneurs has been launched in order to specifically develop viable projects, with much focus being placed on their business model. It will accompany the 12 Innovate Africa finalists, with a further 12 digital media projects from French-speaking Sub-Saharan Africa also being selected following a call for applications.
These 24 projects will receive online support and guidance for around two months, before a one-week acceleration session is held in Dakar (Senegal), which will be attended by African and European mentors.

At the end of this session, the best eight projects will go on to the final phase of the programme, which will involve further online support and guidance for several weeks, and culminate in all of the projects being presented to investors in Abidjan (Côte d'Ivoire).

Verbatim
In Africa, just like everywhere else, the ways in which communication means are evolving are also having an impact on how people keep themselves informed. The idea is to harness the knowledge of the next generation, be they bloggers, journalists, or web or mobile app developers, who understand people’s usage trends and requirements, in order to try to help them invent tomorrow’s media.
Philippe Couve, journalist, consultant, and deviser of the Innovate Africa project

The leaders and co-founders of 24 projects

Innovate Africa – Entrepreneurs Sign up to the laboratory for tomorrow’s media!

July 8, 2016
CFI is on the lookout for 12 African online media projects to help nurture and then showcase to investors.

Remote support for preparing for the acceleration session

Remote support for preparing for the acceleration session: six theme-based sessions on Skype, each lasting one hour, are organised every week with the 24 teams, during which the project leaders focus on establishing their business model.

Acceleration session in Dakar for the 24 projects, at the end of which the eight best projects will be selected to feature in a presentation to investors (to be held in Abidjan).

October 12, 2016
Twenty project leaders from French-speaking Africa met in Dakar for a week's intensive refresher course. The best 8 will be flying off to Abidjan...

Remote support and guidance to the eight selected projects.

December 14, 2016
The eight finalists of the Innovate Africa – Entrepreneurs project have presented their initiatives to corporate investment and advertising...

Meeting with investors for the eight projects selected (in Abidjan).