Taking to the road, to meet the women of Morocco

Between 2018 and 2020, the Echoes of Women’s Voices project provided a mouthpiece for young women living in rural areas of the Marrakesh-Safi region, to spotlight their vision of society and provide an arena in which to express their views.

Despite legislation to foster the development of equality and protect women’s rights in Morocco, discrimination and violations of these rights are still rife.
In rural areas, women are exposed to the issues of underage marriage, a lack of economic emancipation and a high drop-out rate from school. Less than a third of them are educated and over half are illiterate to some degree. Echoes of Women’s Voices was implemented by the Citizen Initiatives Association (AIC), with the support of CFI. It encourages the initiatives of Moroccan women and provides them with a mouthpiece, as stressed by the AIC Project Manager, Azeddine Aabbar: We wanted women to be asking questions as well as answering them!

In 2019, the AIC team set off behind the wheel of a minivan, fitted out with a radio studio and two solar panels to report, interview and broadcast live from rural communities. In this way, it encouraged hundreds of young women to participate in public debate and to work collectively to seek solutions to the issues hindering their rights.
Over a 9-month period, they covered over 20,000 kilometres and met over 500 men and women.

On each trip, the team led a workshop on the specific characteristics of each village, followed by recommendations suggested by the women. The project’s primary achievement was to get these women to leave the private bubble of their own homes and bring them together to talk, without any taboos, and remind them of their rights. After each workshop, they were interviewed in the mobile studio and what they had to say was broadcast in two programmes: Timgharine (which means “women” in Amazigh), to talk about their needs, problems, requirements and expectations, and Moubadarat Nissaiya (which means “female initiatives” in Arabic), as a forum for highlighting their initiatives and plans. 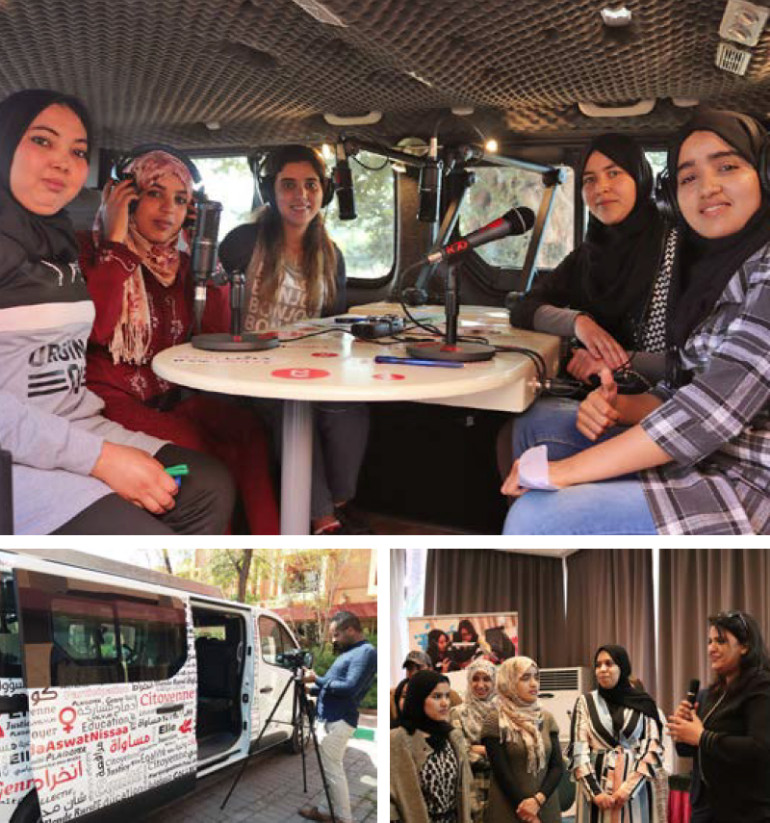 "Enabling women in the region to express themselves in this way is a dream, especially in rural areas,
since these women are more marginalised
than those in town."
Zakia Mrini, Member of Parliament