Dorra Ben AbdelKader, a journalist committed to the future of Tunisian society

Dorra Ben Abdelkader has been a journalist for over twenty years. A career that she has devoted to advancing Tunisian society, whether on the human rights front or that of the environment.
Profiled by Lou Mamalet.

Dorra Ben AbdelKader grew up in a simple family in Tunis. A civil servant dad and a housewife mum who unwittingly imparted a taste for the media and current affairs to her. “I remember when I was little, there was always a newspaper at home; and I really enjoyed browsing it. Come to think of it, maybe that's where my taste for the media was born”, she recalls.

So, when she finished high school, she naturally turned to journalism studies and obtained a Master in Communication Sciences and Corporate Communication from the Tunis Press and Information Science Institute. (IPSI). “When I was admitted to this course in 1996, we were the first journalism class at the university. For me, journalism was an attractive discipline because it allowed me to combine both my literary side and my interest in general culture”, says Dorra.

Shortly after graduating from university, she was recruited into the Tunis Afrique Presse agency, where she made her journalistic début. “I did the 'desks' tour as they say in the business. I worked in the international, regional and political sections, an enriching experience, which allowed me to deal with a variety of subjects and to better understand what I liked.”

Twenty years later, she became deputy editor-in-chief of the society section, covering topics related to education, health and the protection of human rights. This role allowed her to discover her appetite for investigative work, as she explains: “I like to expose flaws in the system, show what hinders the proper application of laws or reveal the lack of a law preventing the proper functioning of society.”

A mission all the more important since the revolution of 2011, which allowed freedom of expression in Tunisian society to be relaxed. “The revolution has given us more freedom to express ourselves, as a journalist and citizen, I have to contribute to improving the general climate by trying to solve society’s problems”, says the journalist.

It is with the aim of achieving this ambition that she is applying to MédiaLab Investigation, a CFI project that has supported investigative work in the Arab world since 2019, a necessity in a region where a lack of funds often prevents journalists from investing in complex subjects over the long term. In particular, she carries out work on the use of pesticides in Tunisian agriculture.
“I needed to analyse certain agricultural products to find out their pesticide levels. This financial support enabled me to carry out these analyses but also to look for testimonies far removed from the city”, she says. But also an investigation into a detention centre for undocumented migrants in Tunisia: “This is an investigation that I am very proud of because I was the first journalist to knock on the door of this centre and show what was happening there.” 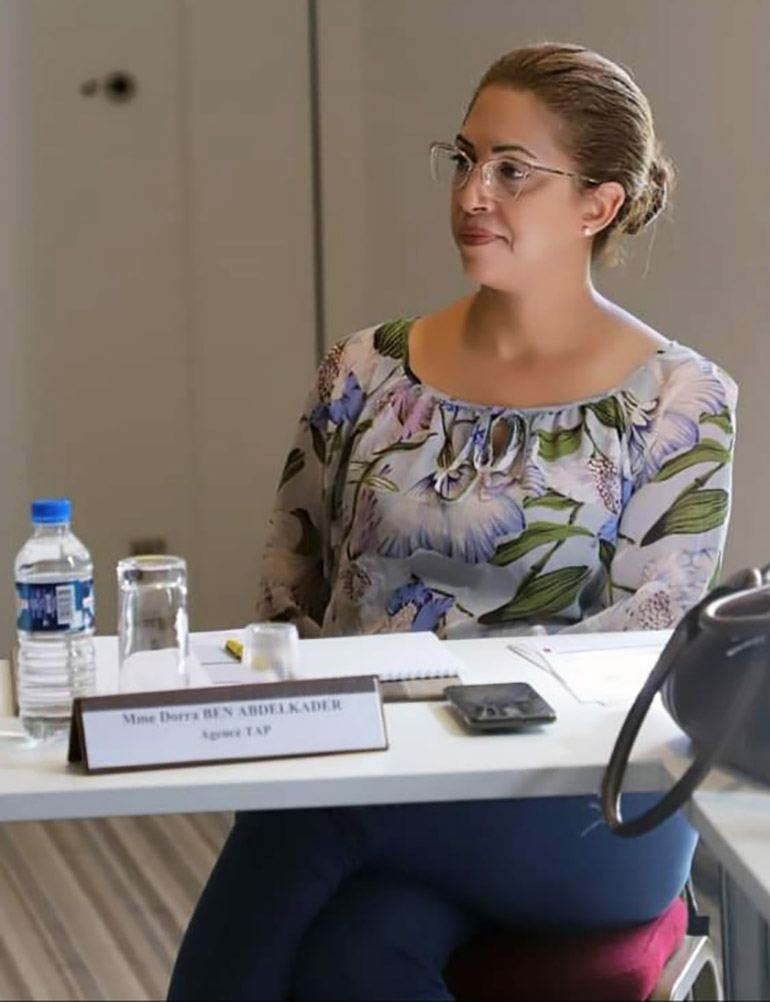 Recently, she completed a dossier on psychological violence against women. This is a subject seldom discussed in the country, despite the government adopting the low of 58, in 2017, with the aim of fighting against the violence committed against them.
“While a law exists to protect us from violence, in reality the approaches and procedures to enforce it do not always exist. For example, in the context of physical violence, it is possible to draw up a certificate with a lawyer in order to assess the damage, but the equivalent does not exist with psychological abuse, except when it has become too severe. This causes great damage to the lives of women.”

This psychological violence nevertheless affects all social and professional categories with emergency rates increasing during the coronavirus lockdown. “There are a lot of women victims of psychological violence, although few of them dare to speak out for fear of not being taken seriously because their pain is often invisible. It is a phenomenon that affects all social circles. Sometimes, educated women in senior positions are scared to acknowledge the harassment they experience at home because they believe they will be judged and their careers could suffer.”

This is a scourge that Dorra Abdelkader wants to continue to fight against, in order to improve the mental health of women. It is also a way of getting closer to another of her vocations, having considered becoming a psychologist if she had not chosen to embark on a career as a journalist: “I really believe that listening to people can save lives.”