Carole Ambassa: in support of health and nature

At 29, Cameroonian Carole Ambassa chose scientific journalism, which, in her words, is closely connected with the day-to-day health and environmental worries of her fellow citizens. Her aim was to provide them with solutions rather than just report the problems.
Profile by Emmanuel de Solère Stintzy.

Even as a teenager, Carole Ambassa loved to write. “I wanted to be a writer. At secondary school, I wrote poems and a short story. I had this ability to write, but then in college, something clicked. I needed more, I wanted to become a journalist”, she recalls, a decision that led her to become editor-in-chief of the Cameroonian newspaper Échos Santé.
At 29, she is now editor-in-chief of Afrik Environnement, which is part of the same press group.
But getting here has been anything but a walk in the park... “My dad was also a journalist and did not think I should follow in his footsteps. He was convinced I would be unemployed...”

Initially, Carole, who comes from the south-west of Cameroon, one of the country’s two English-speaking regions, turned her back on her calling and instead studied English. Then, with the support of her older brothers, she managed to win over her dad, completed a professional diploma in Information and Communication Sciences at the Siantou University Institute in Yaoundé and ended up, almost accidentally, specialising in health.
“The subject came to when my mum had to have three operations on the same leg, I thought to myself, why not use my professional research to access medical information?” she recalls.

With the gift of hindsight and having been part of the Échos Santé newspaper since its creation in 2016, she does not regret her choice: “Scientific journalism is closely linked to solutions journalism. We don’t simply relay information and report problems.” And the social value of this has become even clearer in the light of the current health situation...

“At the start, some people in Cameroon thought Covid-19 was “a hoax”.
We had to work really hard to raise awareness and inform people, because few journalists were on the ground at the time as they did not want to be infected.
But the Ministry of Health followed our advice and opened its doors to reporters and citizens, answering their questions directly via Twitter.”

In a country where journalists are often criticised for their overly cosy relationships with political and economic powers, Carole Ambassa is convinced of the value of modern tools for social interaction: “in 2017 and 2018, I took two training courses run by CFI in Senegal (Media 360° project, Ed.) on journalism, production and hosting on social media. This allowed me to see these networks in a new light, as an opportunity.”
Thanks to this, the Échos Santé website currently has 150,000 visitors and its Facebook page about 2,500 followers.

In June 2020, Carole left her role as editor-in-chief of that newspaper to take up the same position at “Afrik Environnement, le journal de l'environnement, des énergies renouvelables et des Objectifs de Développement Durable [the newspaper dedicated to the environment, renewable energy and the Sustainable Development Goals]”, another publication that belongs to the same press group.
“Carole manages the difficulties of the job well. Given her experience, she will bring the conversation around to the environment”, says Désiré Effala, Deputy Managing Director of the group.

“In Cameroon, the environment is a strategic sector that has had little coverage until now. I’d like to stand out from the crowd. I want people to remember me as a dedicated journalist”,
says the scientific reporter.

It’s just one more battle for Carole Ambassa, who already supports children with Down’s syndrome and young drug addicts as head of communications at the Triso-cœur and Jeunesse Sans Stupéfiants associations. 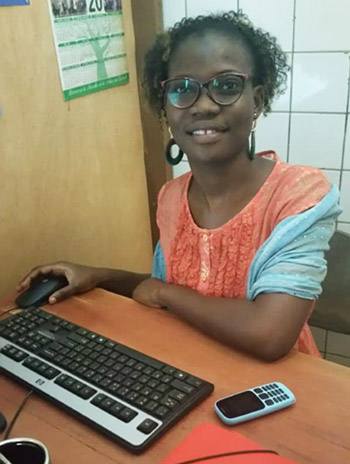 “My mum tells me that I always find ways to solve my own problems. But I would also like to find solutions to the problems that everyone faces!” she concludes.
As head of communications at the Triso-cœur and Jeunesse Sans Stupéfiants associations, she hopes that the next ten years will bring progress in education for children with Down’s syndrome in Cameroon. She would also like to promote entrepreneurship among young people to prevent them falling victim to drugs. But there is no question of her “removing her journalist’s hat”.

Désiré Effala, Deputy Managing Director of the Échos Santé Group, seems, more or less, to have come to accept the fact that, at some point, she will have to see this valued employee leave: “Carole is a hard worker. In ten years, she will have grown and may well leave to join another media outlet to take her career further.”

Her brother-in-law, Kouao N’tamon Samson, thinks she would do well to become an investigative journalist, as she is already required to head off in search of information on health and environment. Gilles Tientcheu, a friend of Carole Ambassa since 2011, confirms this:
“She is determined and knows how to harry people! When she needs information, she won’t leave me alone all day, but that’s also what drives her in her projects!”

In 10 years’ time, he would like to see his friend’s skills recognised financially for what they are worth, in a position with responsibilities in television or radio.