Moussa Diallo, 38, is a Senegalese screenwriter and aspiring director. Curious, observant and at the same time strongly action-oriented, he devotes himself full time to his passion.
Profiled by Emmanuel de Solère Stintzy.

If you pass in the streets of Senegal, don’t take offence if 38-year-old Moussa Diallo doesn’t greet you! A promising screenwriter and director, Moussa is sometimes in his own world, searching for stories, characters and images for film and television: When I start a project, I work on it ‘24/7’, even when walking down the street. I’m so concerned about doing well, I never sleep the night before a shoot...
But where does this energy come from, this “desire to succeed”, as he calls it? Moussa Diallo explains that the people he grew up with were often baffled by his insatiable curiosity... “Weapons, arrests, action, suspense... I grew up with it all as a child as my father was a gendarme. Although he forbade me to do so, I would sometimes approach the inmates to speak with them... recalls Moussa.

Immersed in non-stop observation and action, the young man quit secondary school before his exams and appeared to be on the verge of turning to the dark side... One night, an old teacher of mine took a photo of me during a fight on a night out in a club. He said ‘this is not you!’
Doudou Haydara, a maths teacher who also manages an editing suite/camera rental studio, then introduced the young Moussa to images: I spent five years reporting. When I was filming weddings, I saw wives-to-be who were not in love and future husbands who had no means of supporting their future family... I felt compelled to tell their stories. I then went on to film hip-hop music videos and popular theatre films. 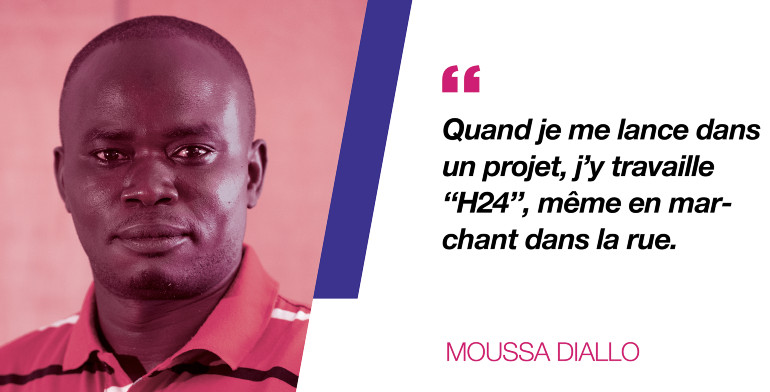 Training in the United States or in France

His desire to write things for himself gave rise to a number of scenarios, most notably his first short film (Cette nuit-là “Tonight”, which won an award at the ‘‘Clap Ivoire” festival in Abidjan) and Justice Divine which provided inspiration for Tundu Wundu (“Cats’ Lair”, season 2), which was named best series at Fespaco 2017 (Burkina Faso).
Producer-director, Abdoulahad Wone, was immediately won over by this story and Moussa himself, who was willing to sacrifice himself to succeed. Anna Gomis, creator of the pan-African series, “Renaissance” (based on an original idea by Alexandre Rideau) confirms this: Moussa can be found working on scripts and sequences between 10 p.m. and 4 a.m.!
Fellow screenwriter, Dialika Sané, co-wrote the series, “Wara” (“Wild Animals”, with Moussa and other writers, which was co-produced by the French Development Agency and TV5 Monde, in partnership with the Senegalese NGO, Réseau africain pour l’éducation et la santé (African Network for Health Education, RAES): Moussa is a ‘profiler’ with a great sense of observation and an incredible imagination! When he has an idea, he will write to you at 3 a.m. and draw you into it with him. ...he knows the emotion that each character needs to convey.

Moussa Diallo realises that he has learnt a lot over the last few years, thanks in particular to CFI: “The writing workshops (Editor’s note: part of the Writing and producing in Africa project), taught me diverse perspectives for bringing my films to life. For Wara, I was taught how to write by several writers from different countries. I now want to structure my knowledge and obtain a scholarship that will allow me to receive training in the United States or in France.
This would bring the budding director closer to his idols, Tarantino, Besson and Hitchcock, masters of action and suspense. Even Moussa’s gendarme father, Mbaye Diallo, was eventually won over by his son’s enthusiasm: At the time, given his intelligence, I was expecting him to go onto higher education, but I have been pleasantly surprised by the progress he has made. Moussa has even helped his brothers to get into his trade. Un air de famille (a “Family Resemblance”) reminiscent of French director, Klapisch, which is now putting ideas of working together in Moussa’s cinema-loving mind...

The response is unanimous. In ten years, Moussa Diallo: will be making his own films”. “He already enjoys writing and has proved he has the drive and imagination. I was an editor before becoming a director. You improve with each project you complete, stresses producer-director, Abdoulahad Wone. Series creator, Anna Gomis, encourages Moussa to be more daring when it comes to meeting directors on set: As a screenwriter, he knows the emotion that each character needs to convey.
”. Fellow screenwriter, Dialika Sané, envisages him writing and directing “political thrillers, action films or socially engaged films. DStigmatised drug addicts, the kidnapping of a politician’s family, etc. It is true that, to date, Moussa Diallo has not really been in the habit of addressing light subject-matter: We still have plenty of traditional stories up our sleeves, but I would like my films to be a window on the world.

In ten years, Moussa hopes that he will have received training from directors and film schools abroad: I need to have complete confidence in my arsenal if I am to set up a production company (Editor’s note: possibly family-run) and make films for TV and cinema.