CFI works to foster media development in Africa, the Middle East, South-East Asia and the Balkans. We support media players to foster dialogue between local authorities and citizens, to ensure that people gain the best possible access to information. Core topics include fighting misinformation, promoting gender equality, protecting the environment and promoting democracy and civic engagement. 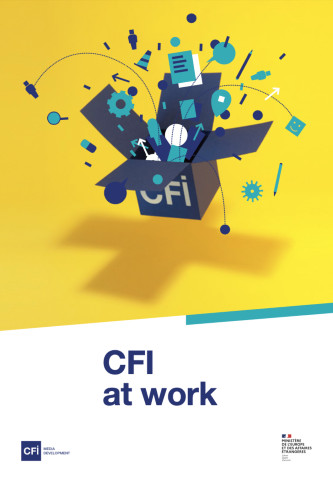 Dozens of journalists working for international media organisations in Europe, Africa and Asia share their experiences to help young fellow journalists from all over the world to better decipher news information and to develop constructive journalism.

Brochure 2018
CFI is committed to developing the media in Africa, the Arab world and South-East Asia. The French media development agency first of all identifies and analyses what is required, and then works tirelessly alongside media organisations and the professionals who run them, together with members of civil society, all of whom are fighting for inclusive and democratic news in their country.

Portraits
30 journalists from all over the world tell their story. This collection of portraits profiles 30 journalists having benefited from CFI support in the past years. We recount their personal and professional journeys, how they came to their vocation, their commit- ments, struggles and hopes. But this is not just a set of stories of fascinating individuals: it is a tribute to the community of beneficiaries as a whole, honouring all media players worldwide, with whom our staff work on a daily basis.

As a media development agency, CFI is committed to developing a specific policy to promote equality between women and men, through the adoption of a "gender" strategy.
While the Agency has placed particular importance on gender equality for a few years, this issue is becoming today a priority, given the fundamental role played by the media in transmitting values and representing identities. Read more

Civic tech in Africa: people and technology dynamising our democracies

First assessment in Benin, Kenya, Senegal and Tunisia.
The first signs of what we now call African civic tech can be traced back to Kenya, in 2007. Active citizens (bloggers and software developers) decided to create an online platform to report on postelectoral violence.
Read more.

What role does the media play in reconciliation and social efforts in post-IS Iraq
Mossoul/Erbil - 23 March - 10 April 2018
In March and April 2018, a series of workshops in Mosul and a wrap-up conference in Erbil brought together Iraqi journalists and stakeholders working in the field to discuss the role of the media in the country's stabilisation process.
Read more.

I am a Libyan journalist

In order to preserve the democratic dialogue in Libya, CFI launched theHiwarproject in early 2017, in partnership with the Crisis and Support Center of the Ministry of Europe and Foreign Affairs.
This booklet, entitled "I am a Libyan journalist", contains free texts prepared by Libyan journalists who took part in the Hiwar session.

200 online media representatives from 38 countries brought together in Paris: 20 & 21 April 2016.
In Syria, Syria Untold, an independent digital media project, explores a 'new narrative' of the daily struggle of the Syrian people and their diverse forms of resistance, which men and women are writing day by day.
Read more.

Over a five-month period in 2015, some 2,800 people took part in the two learning segments making up the Innovate Africa Massive Open Online Course (MOOC) (one for Journalists, the other for Web Developers), with a pass rate of 10%.
Read more.

On 21 and 22 July 2015, 13 Syrian alternative radio stations and 9 radio stations from Arab countries in the region gathered in Gaziantep (Turkey) to take part in a joint reflective process and share editorial practices between radio stations operating in conflict or post-conflict situations or in difficult transitions.
Read more.

On 21 and 22 July 2015, 13 Syrian alternative radio stations and 9 radio stations from Arab countries in the region gathered in Gaziantep (Turkey) to take part in a joint reflective process and share editorial practices between radio stations operating in conflict or post-conflict situations or in difficult transitions.
Read more.

A few weeks on from the attack on the offices of Charlie Hebdo, the challenges that have stirred our country since 7 January must also be faced, perhaps first and foremost, by the regions of the South where CFI works throughout the year to create a strong fabric of professional and democratic media.
Download the PDF.

This document is an abridged version of a wide-ranging survey conducted between July 2014 and January 2015, which attempts to provide an overall view of the complex, ever-changing and fluid landscape of the online media in the Arab world: Algeria, Egypt, Jordan, Lebanon, Morocco, Palestine, Tunisia and Syria.
Read more.

DTT: a practical guide to the digital switchover in Africa