Lina Chawaf, the voice of a free Syria

To mark World Radio Day on 13 February, CFI is inviting you to discover more about the career paths taken by three radio journalists from the Democratic Republic of the Congo, Syria and Tunisia.

Radio Rozana, is an independent media network which was created in 2013 in the aftermath of the Arab Spring and has been led for some time now by Lina Chawaf, an exiled Syrian journalist who is now the network’s Executive Director.
A profile by Lou Mamalet.

Lina Chawaf comes from the Syrian capital of Damascus, once a prosperous city during the Umayyad dynasty in Arabia. Following on from her role as editor-in-chief, she is now the Executive Director at Radio Rozana, a free and independent Syrian media network that broadcasts its programmes from Paris. The 50-year-old is also a member of the Community Media Forum Europe (CMFE).

A female TV and radio personality in Syria

Syrians became familiar with the face of Lina Chawaf before she made a name for herself in radio, in contrast to the career trajectory of many journalists. After studying fine arts, she was hired as an assistant to a renowned television director in the early nineties before becoming a director herself at a Lebanese production company. Over twelve years, she produced more than 200 commercials, which included child awareness TV clips on behalf of UNICEF.

When the Syrian government was granting development licences to private media networks at the start of the twenty-first century, the young journalist applied for one and founded Arabesque FM, an adventure that very quickly became a success.
“Arabesque was a very popular and well-known radio station even though it remained an entertainment station for the most part because the licence prohibited us from all forms of politics or journalism,” she recalls. “But we launched a number of programmes while working with civil society and NGOs committed to human rights”.

Radio Rozana, a free media network for the Syrian public

In 2011, Tunisia provided the spark that set off the Arab Spring riots. It did not take long to reach Syria where it was crushed with violence by the Bashar al-Assad regime. Lina was threatened by the authorities because she refused to broadcast propaganda supportive to the regime, so she decided to go into exile abroad – first in Canada and then in France. At the same time, she became an editorial consultant for the IMS (International Media support) cooperation agency in Denmark, with whom she launched a series of independent radio stations in several countries affected by the Arab revolutions.
In 2013, she was appointed editor-in-chief at Radio Rozana (which in Arabic means a “window that allows light in”), a free radio station considered to be a ray of light amid the daily gloom for Syrian citizens.
“This radio station was necessary because thousands of civilians and many journalists had been killed since the conflict began and there was hardly anyone left to pick up the pieces”, says Lina Chawaf. 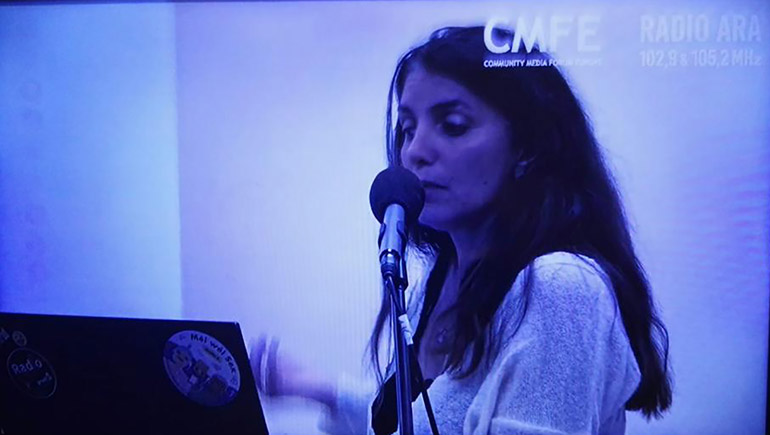 This project was established in partnership with CFI and received funding and logistical support to train the journalists and correspondents who stepped in, most of whom were Syrian citizens without any background in journalism.
“CFI helped us in many ways – training our correspondents on the Syrian-Turkish border and teaching them the basic rules of storytelling, how to conduct interviews, and also how to shoot and edit a video. They also helped us to source somewhere where we could store our media because it was not easy to be accepted as a Syrian radio station back then”, recalls the network’s Executive Director.

Changing Syrian society from within

The station’s editorial team is now set up in Paris because many Arab-speaking journalists live there and it operates from a secret location in the capital to avoid any retaliation from the Syrian regime. The station has come a long way. With 8 million listeners nowadays, the station employs around 20 people and has a network of around 30 independent journalists that it can call upon. It is broadcast online on its website but also on FM radio in Southern Turkey and Northern Syria, where nationwide coverage is impossible because radical armed groups damaged the station’s transmitters. Its credo is to displace the Syrian regime by effecting change in society.
“I have always thought that certain aspects of society needed to change, maybe because I spent half of my teenage years in Germany where my parents studied architecture. I noticed very early on that many things in Syria were off limits to me as a woman and I became aware of the routine injustices done to my female compatriots on a daily basis”, explains Lina Chawaf.

This profound endeavour continues to be seen in the journalistic choices she makes in order to educate future generations of Syrians. “You cannot claim to be free if you cannot allow your daughter to seek an education. Although many young men demanded freedom during the Arab uprisings, they were unwilling to extend that freedom to their sisters. A confusing and contradictory state of affairs. That is why Syrian society must be changed from within and that won’t happen overnight. You can bet that it will take generations, but at least we are beginning to sow the seeds for the future”, she grins.